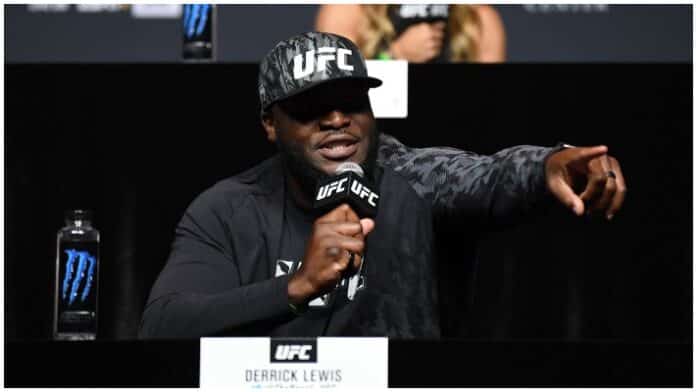 ‘The Black Beast’ was his usual hilarious self ahead of one of the biggest fights of his career.

Lewis is set to take on Ciryl Gane for the interim heavyweight title in the UFC 265 main event this weekend.

Ahead of the bout, both men sat down and fielded questions from the media and fans at the UFC 265 pre-fight press conference.

One plucky French reporter decided to get cheeky with the most dangerous knockout artist in UFC heavyweight history, he asked.

“Derrick, how will it feel to get beat by a Frenchman in front of your fans?”

“You’re gonna have to excuse my French but f*ck you and f*ck him,” Lewis replied triggering a chorus of laughter.

“We’ll remember that on Saturday night,” the reporter responded.

Lewis has been in fine form and is currently riding a four-fight win streak which included a spectacular knockout win over Curtis Blaydes last time out. A win could set up an eagerly anticipated rematch with Francis Ngannou. Lewis is one of two men to have defeated the Cameroonian knockout artist inside the Octagon. ”The Predator’ has since avenged his defeat to Stipe Miocic.

Gane is coming off the biggest win of his career over Alexander Volkov at UFC Vegas 30 in June. The Frenchman easily outpointed Volkov over five rounds to stretch his perfect record to 9-0. ‘Bon Gamin’ also holds high-profile wins over Junior dos Santos and Jairinzho Rozenstruik. A win over Lewis at UFC 265 sets up the biggest MMA fight in French MMA history with Ngannou.

Who do you think will become the interim heavyweight champion at UFC 265? Derrick Lewis or Ciryl Gane?