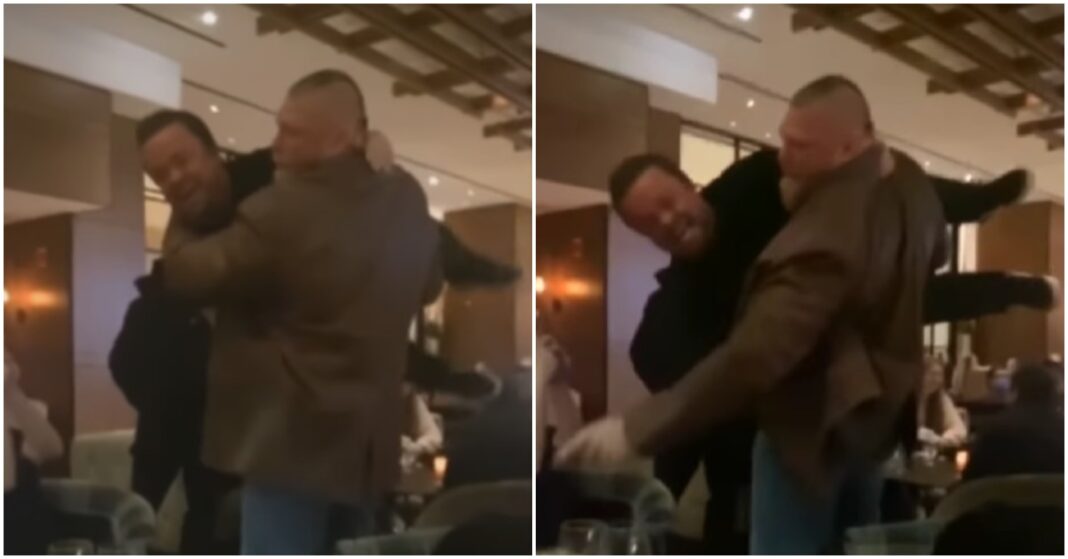 The WWE superstar was hanging out with the Jackass crew ahead of his match against Bobby Lashley which takes place at Royal Rumble in St Louis tomorrow night.

Johnny Knoxville of Jackass fame will actually be part of this year’s Royal Rumble after throwing Sami Zayn out of the ring during an episode of SmackDown to qualify for the 30-man match.

The video begins with Lesnar holding Weeman in his arms as his Jackass castmates encourage the 44-year-old to hurl their friend through a table. Lesnar eventually obliges and his actions are met with laughter and high fives from his newfound friends – check out the hilarious clip below.

Lesnar and Lashley are two of the few WWE stars who have successfully transitioned to MMA. The WWE champion had tremendous success in the UFC, beating the likes of Randy Couture and Frank Mir while he also holding heavyweight gold.

Lashley is a former Bellator and Strikeforce heavyweight who amassed an impressive 15-2 record in MMA. ‘The Dominator’ holds several high-profile wins over the likes of Jason Guida, Bob Sapp and James Thompson. Lashley has not fought in MMA since 2016 when he defeated Josh Appelt via rear naked choke submission.

During a recent appearance on The MMA Hour, Lashley claimed that although he never became a champion in the sport he was a better MMA fighter than Lesnar.

“Without trying to disrespect him, I don’t know what he’s capable of doing as far as, like, skill wise because I don’t know,” Lashley said. “Afterwards, I taught boxing, I taught jiu-jitsu at my gym. As far as skill for skill and knowledge for knowledge, I have a lot more than he does.”

Who do you think was the better MMA fighter, Brock Lesnar or Bobby Lashley?