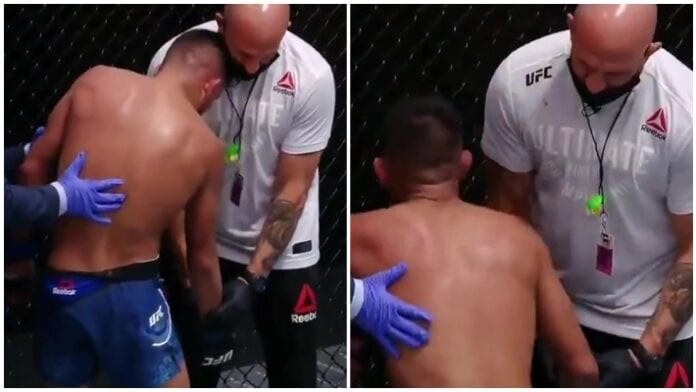 In a high-paced, action-packed opening frame which we’ve become accustomed to when either Moreno or Royval enter the Octagon, the latter briefly threatened with a guillotine, before the former flirted with a possible twister setup.

With just a single-second remaining in the opening-round, streaking flyweight contender, Royval dislocated his right shoulder, with number-one contender, Moreno able to finish with ground-and-pound – sealing his shot at the flyweight title next month.

Marc Goddard jumped in to call a halt to the action and Royval began clutching at his right shoulder, which had appeared to pop from its socket. His head-coach Marc Montoya was caught on camera twisting his student’s arm and you can see Royval’s shoulder immediately pops bag in to place – check out the video below.

This is Royval’s first defeat inside the Octagon. He has previously looked sensational in fights against Tim Elliott and Kai Kara-France. Moreno is currently riding a five-fight unbeaten streak and managed to make his already solid case for a 125lb title shot even stronger.

Post-fight UFC president Dana White revealed he will have Deiveson Figueiredo fight again before the year is out, he said.

ESPN later confirmed that Figueiredo and Moreno had verbally agreed to fight at UFC 256 on December 12.

Who will win at UFC 256? Deiveson Figueiredo or Brandon Moreno?