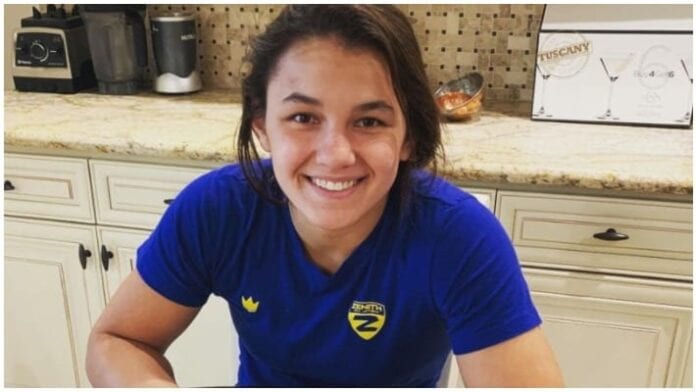 The young prospect made her debut October 22 under the Ikon Fight Federation banner and emerged victorious via unanimous against Danielle Wynn.

On Friday night Mir was once again in action in Mexico and looked sensational in victory against featherweight fighter Alma Cespedes. Frank Mir’s daughter showed off her impressive ground game, sunk in a rear-naked-choke to put her opponent to sleep .

Frank Mir took to social media to post a video from his daughter’s second pro win and heap praise on “chip off the ol’ block” Bella Mir – check it out below.

Prior to her debut, Mir signed with First Round Management who guides the career of her father. Malki Kawa took to social media to announce he will be oversing Bella’s rise through the ranks.

“This one is a good one… please help me in welcoming 17 yr old @ladymir11 Bella Mir to the @firstroundmgmt family,” Kawa wrote on Instagram. “Bella’s happens to be the oldest daughter of 2x heavyweight champion and first Cuban champion ever in the @ufc, @thefrankmir. Now here’s the best part: bella is regarded as the best athlete in Las Vegas, male or female, her dad has been training her for years, and well… she’s making her pro debut next month‼️ skies the limit and here’s to the real future of the women’s divisions everywhere! I’d say welcome to the fam, but you’ve been family! #mir #mma #womanpower #fightlikeagirl”

Do you think Bella Mir will make it to the UFC?