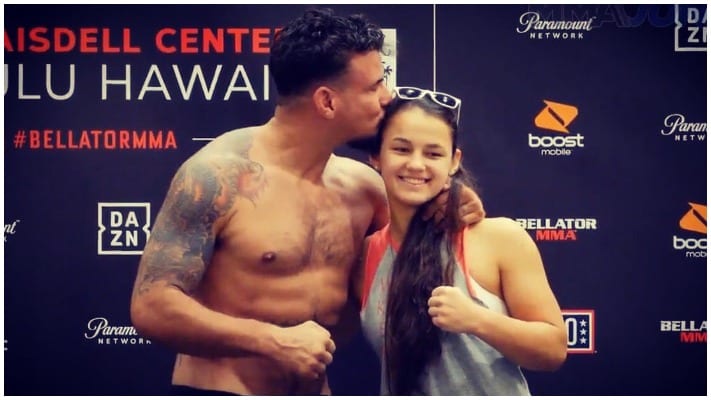 Bella Mir, the 17-year-old daughter of former UFC heavyweight champ Frank Mir is set to make her professional MMA debut after signing with First Round Management.

MMA manager Malki Kawa who also guides the career of Frank Mir announced on social media that he has signed his client’s daughter ahead of her pro debut which will take place later this month. The bout will take place on October 22 under the Ikon Fight Federation banner in Mexico. Mir’s opponents has not yet been announced but the youngster is set to compete at bantamweight after training under her father for the majority of her life.

“This one is a good one… please help me in welcoming 17 yr old @ladymir11 Bella Mir to the @firstroundmgmt family,” Kawa wrote on Instagram. “Bella’s happens to be the oldest daughter of 2x heavyweight champion and first Cuban champion ever in the @ufc, @thefrankmir. Now here’s the best part: bella is regarded as the best athlete in Las Vegas, male or female, her dad has been training her for years, and well… she’s making her pro debut next month‼️ skies the limit and here’s to the real future of the women’s divisions everywhere! I’d say welcome to the fam, but you’ve been family! #mir #mma #womanpower #fightlikeagirl”

Are you excited to see Frank Mir’s daughter compete in MMA?