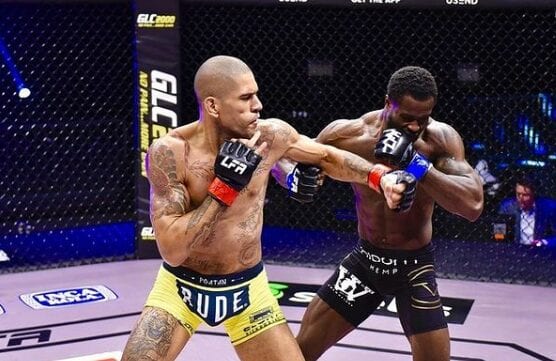 Alex Pereira made his highly anticipated LFA debut Friday night and it was worth the wait as he got another KO. Pereira is known from being the only man to KO the current UFC Middleweight champion Israel Adesanya back in the day.

Pereira, who just signed with LFA this year, is mainly a kickboxer that transitioned to MMA in 2015, however he still competes in kickboxing and is the current Middleweight and interim Light Heavyweight champion for GLORY. On Friday night Pereira got his first LFA victory in the first round by landing a perfect left hook 4 minutes into the fight.

You can watch the KO below:

Pereira is now 3-1 in MMA and riding a three fight win streak finishing all fights via KO/TKO, he only lost his debut fight in 2015 via third round submission. This was Pereira’s first MMA fight since 2016 and he is now looking to be more consistent in MMA and climb the ranks. After the fight Pereira said “I’m very happy to be in MMA, I’ve been training with Glover Teixeira for 3-4 months, and I’m happy with the results.” (Transcribed by talkSPORT)

The Brazilian had two fights with Adesanya in GLORY, the famous one where he KO’d the Nigerian UFC champion and a second fight in which Pereira won via unanimous decision. He recently stated that he doesn’t believe that Adesanya wants to fight him again for a third time.

What do you think of Alex Periera’s KO?