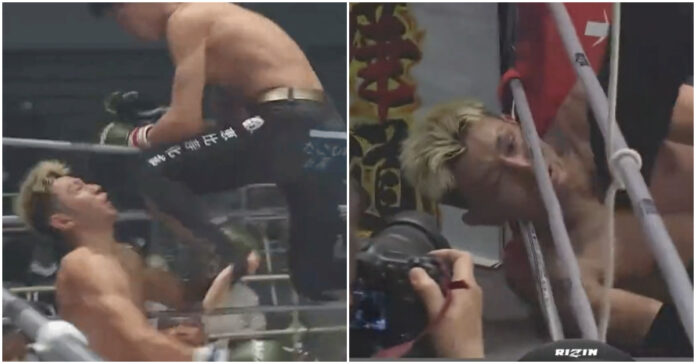 RIZIN 34 served as the perfect conclusion after UFC Fight Night: Volkov vs Aspinall for a weekend full of highlight-reel finishes.

Following the incredible finishes at the UFC Fight Night on Saturday in London, RIZIN 34 compiled a reel of its own at the Maruzen Intec Arena in Osaka, Japan. The Japanese promotion hosted a combination card of MMA and kickboxing on Sunday that featured one of the coldest knockouts in the undercard that fans witnessed over the weekend.

It was during the 134-pound kickboxing match-up between Japanese fighters Yuki Kasahara and Motoki when Kasahara managed to back Motoki up against the ropes with punches. In the third minute of the opening round, Kasahara knocked him out cold with a vicious flying knee right in the face that sent him rolling through the ropes unconscious.

As for the main event, veteran featherweight Satoshi Yamasu came out victorious over the 26-year-old prospect Kyohei Hagiwara with a triangle armbar submission in the very first round.

Where do you rank this RIZIN knockout with the UFC Fight Night finishes?