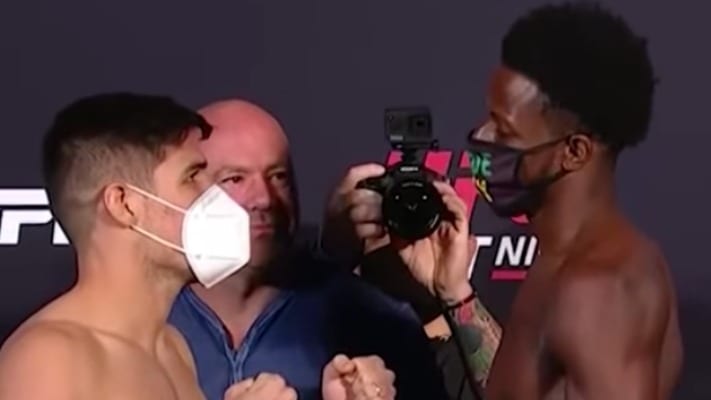 Next up on the UFC Vegas 5 main card is a welterweight clash between Vicente Luque and Randy Brown.

Round 1: Brown starts with some jabs but receives a leg kick from Luque. Brown lands his own leg kick but later recives another one. Luque continues to land low kicks. Luque partially lands an overhand right. Luque drops Brown with a right hand as the latter enters the pocket. Luque eventually goes to his feet after engaging Brown on the ground. Luque goes to the leg kicks again. Brown looks to establish a jab but keeps getting caught on the counter by Luque who continues to back him up against the fence. Luque staggers Brown who later goes for the body lock and has him up against the fence. They separate and the round ends.

Round 2: Brown lands a front kick that partially lands on Luque’s head. Brown lands a stinging body kick and Luque responds with a leg kick that hits the groin of Brown as the fight is momentarily stopped. It resumes soon after. Brown lands a teep kick to the leg. Luque blocks a spinning back kick. They start to engage more. Luque lands a leg kick. Luque is showing good head movement as he avoids the jab of Brown. He drops Brown after another thunderous leg kick. Luque lets him up. He continues to land leg kicks as Brown switches stances. Brown clinches Luque up and looks to land knees but Luque is aware of the situation. Brown catches a body kick and lands a spinning elbow. Brown is backed up against the fence and uses good head movement to avoid strikes. He later lands a huge takedown with a minute left in the round. Luque gets up soon after. Luque lands a knee to the head that has Brown out as he finishes him to get the TKO win!