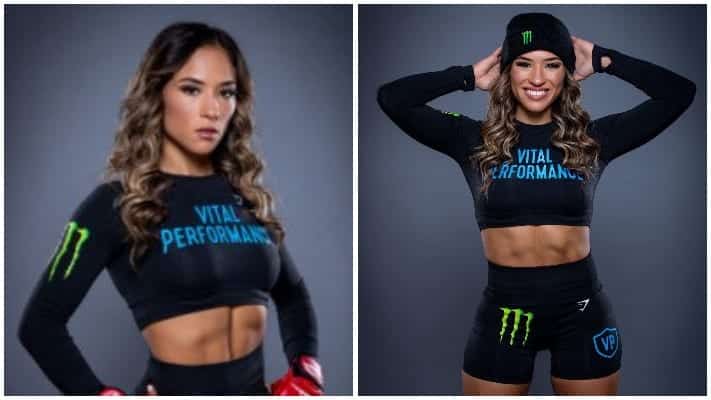 Valerie Loureda has taken the MMA world by storm, but she always knew that her destiny is to make an impact.

The Bellator flyweight recently sat down for an interview with LowKickMMA ahead of her fight at Bellator 259 this weekend. Already a fan favorite, Loureda says that she’s not at all surprised at the attention she’s received so early in her career.

“I’ve always known what I’m meant to do in this world and my purpose. I kind of put myself in the worst positions in order to grow and be here right now. But, you know, I love it. I’m very grateful for it and that’s why I train as hard as I do.”

Loureda (3-0-0) has high expectations for herself as she welcomes newcomer Hannah Guy (2-1-0) to Bellator.

The striker trains at American Top Team and has focused quite a bit on improving her wrestling skills.

“You know, my wrestling has been the major focus for me and every single camp of mine. So, I’m kind of just better at it now. I understand it, and I’m a very good wrestler with a Cuban base. I think I’m just going to impress a lot of people. ‘Cause I’ve never got an opportunity to show it that you know? Everyone at the gym knows the wrestler I am.”

Loureda also shared that there were additional areas of focus this camp.

“It’s my mental. This fight camp I worked on my mind. I’ve had to deal with a lot before this fight and a lot of family changes and a lot of things we’ve been through. I learned how to release my anxiety, how to breathe, how to meditate, and just remember who I am. Remember what I was born to do and to remember what I’ve been living a whole life and not let anything or anyone get in the way of that.”

Are you excited to see Valerie Loureda attempt to maintain her undefeated record at Bellator 259 this weekend?