LowKickMMA.com
Home UFC News Valentina Shevchenko Out Of UFC 251 Fight With Joanne Calderwood Due To... 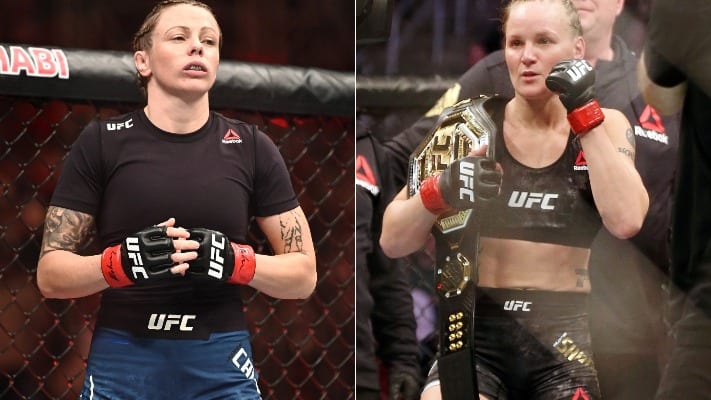 The UFC’s return to Perth has taken a hit as Valentina Shevchenko will no longer be competing.

Shevchenko was set to defend her women’s flyweight title against Joanne Calderwood in the co-main event of UFC 251 taking place June 6.

However, “Bullet” will have to wait for her next potential title defense due to an ongoing leg injury per ESPN. Shevchenko sustained the original injury during her title defense against Katlyn Chookagian at UFC 247 last month but it hasn’t completely healed up since.

Shevchenko expects to be fully healed up by the end of August.

Even if Shevchenko was ready to compete, it is unlikely the card would have gone ahead given how the coronavirus pandemic continues to put a halt on the world. Calderwood believes the fight getting pushed back may even be a blessing in disguise given what’s going on right now:

“We got word last week that it’s going to get pushed back,” Calderwood told MMA Fighting’s Eurobash podcast. “Not because of this whole thing, but something on her end. I’m not sure if I’m supposed to say that, but we know for sure that it’s not going to be on June 6. I don’t know, I’m not sure what happened or what’s what, but it’s been pushed back. It could be a blessing in disguise.”

UFC 251 is expected to be headlined by a featherweight title fight between Alexander Volkanovski and Max Holloway.

Do you think UFC 251 will still take place or will it get postponed?