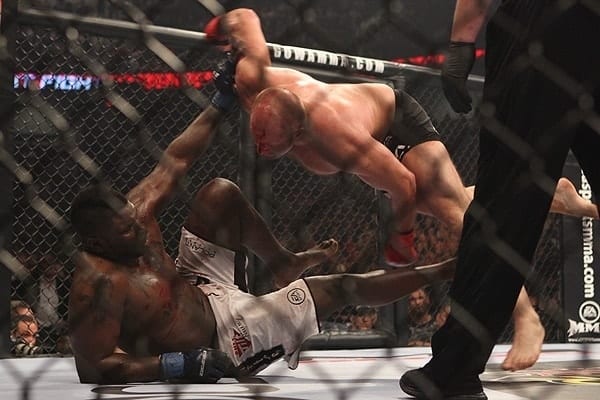 The mixed martial arts (MMA) world was hit with some surprising news last week when it was announced that legendary former Pride heavyweight champion Fedor Emelianenko would be making an unexpected return to an MMA cage at a yet-to-be determined date and locale.

Speculation immediately ran rampant as to where Fedor would fight in his return; due to his previous relationship with Bellator MMA president Scott Coker and his recent appearances at a few of their events, it was believed that they were the frontrunners in the sweepstakes for ‘The Last Emperor.However, it’s not tough to see that the truly big fights for the 38-year-old Emelianenko are in the UFC Octagon. Current UFC heavyweight champ Fabricio Werdum ended his illustrious 10-year unbeaten streak under the Strikeforce banner in 2010, paving the way for a potentially monumental rematch for the title.

Even though the negotiations to get Fedor into the UFC for a fight against Brock Lesnar at Cowboys Stadium were notoriously rocky, Emelianenko’s manager Vadim Finkelchtein recently spoke up to Submission Radio to say that if UFC president Dana White comes around with a good offer for them, there’s a ‘big chance’ he would sign with the UFC:

“If Dana would not only talk, but do some things [and] will make a good offer to Fedor, they have a big chance then.”

M-1 Global’s owner would then asked if the UFC’s new uniform sponsorship deal with Reebok would get in the way of him possibly signing with the UFC, to which Finkelchtein actually said the athletic apparel giant would most likely be interested in Fedor:

“It’s not going to be a big problem because I think Rebook is interested in Fedor as well as the UFC, and I think if they really want this they will find some ways.”

Moving back to White, whom Emelianenko and the rest of his M-1 management said treated them with disrespect, Finkelchtein cleared up that there is no lasting animosity between the two sides. He knows that White is just a promoter looking to stir up interest, so they don’t hold a grudge against the UFC president:

“Dana talked a lot. [He] talked a lot about Fedor, about Vadim, and he talked bad. But Fedor understands that it all was just PR. He’s not in a bad relations with Dana and he doesn’t feel anything bad about him.”

A big reason why the UFC’s earlier negotiations with Emelianenko didn’t pan out was M-1’s insistence on co-promoting any event Fedor fought on. While the UFC wouldn’t acquiesce to that demand, World Series of Fighting (WSOF) recently came calling with an offer to do just that, something that Finkelchtein ultimately turned down:

“Well, when it comes to M-1 we are not really interested in any kind of co-promotion. M-1 is a self-contained, European promotion which has no less than 12 shows a year, and this number is about to grow every year.”

Changing his tune from their focus on co-promotion, Finkelchtein said that M-1 also wouldn’t be interested in doing a similar deal with Bellator either, as Emelianenko is in a different position as a part owner of the self-sufficient outfit:

“I don’t think that a co-promotion with Bellator is possible. The other time when we co-promoted with Strikeforce [it was] because Fedor had a contract with M-1. Now it’s a different story. And, well to repeat what I said before, I want to say that M-1 don’t really need any co-promotion.”

The bidding is about to ramp up for ‘The Last Emperor’s’ services. Is there finally a ‘big chance’ that he signs with the UFC like Finkelchtein said, or will Bellator break the bank to bring him into their ranks?

As usual, White had his canned response of “we’ll see what happens” when faced with Fedor’s situation after last week’s (Wed., July 15, 2015) UFC Fight Night 71. In the meantime, cast your vote on where you think Fedor should fight in our poll, and stay tuned to LowKick MMA for any developing news on his signing!