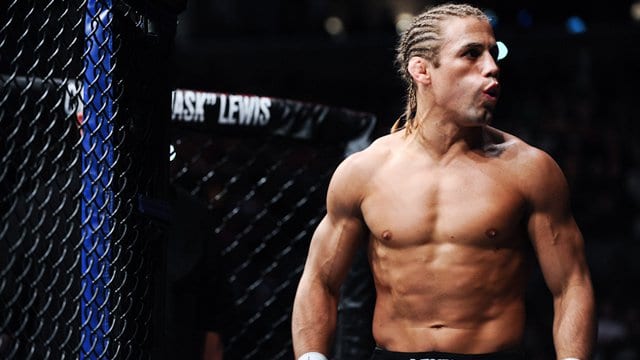 UFC bantamweight champion TJ Dillashaw returns to action this weekend (Saturday July 25th) as he takes on Renan Barao at UFC on FOX 16. The rematch with the Brazilian bantamweight ex-boss has been heavily debated, as has a potential meeting between ‘The Viper’ and his team mate Urijah Faber. The former WEC (World Extreme Cagefighting) champion has been vocal in his support for Dillashaw over the years, but the rift between ‘The California Kid’ and TJ’s striking coach Duane Ludwig has really come to a head recently.

Perhaps it’s fitting that FOX Sports publish an interview with Faber, where he flat out states that he’ll fight Dillashaw if that’s what the 135-pound champ wants. Check it out:

“That’s something that I always told TJ — if he thought that was the best opportunity for him whether it be monetarily or exposure or whatever it would be, if he wanted to ask for that fight, I would do it,” Faber said. “That’s about the only way it would happen.”

“I would say people have talked about that and you never know what’s going to happen,” Faber said about fighting Dillashaw. “I, myself, am not gunning for that fight but I’m always gunning for a title. I don’t have a lot of time left in this sport, just by choice. I’m a healthy, physically fit, durable guy that could keep going but I’m not going to be doing this forever. I’m going to be in here while I’m still at the top of the game.”

“It’s not the fight I’m looking for but you never know how the chips will fly and what will happen. I think there’s some other big fights out there as well.”

With his recent loss to Frankie Edgar in the featherweight division it’s sounding a lot like Faber might be considering a return to bantamweight action. With Dillashaw currently heading that category, a future fight between the two is nearly inevitable. That is, if Barao is unsuccessful in his rematch with the Team Alpha Male stand-out.

”The California Kid’ has also been linked to a potential fight with TUF 22 opposing coach Conor McGregor, so the options truly are massive for the TAM stud.

“There’s been a couple of ideas of fights thrown out for me. I’m still undecided if I want to go 45s or 35s. I feel like there’s a big opportunity at both and I know my management has been talking about possible matchups. I’m just looking for those fights that continue to get me in a position where I can strike at a title shot,”

Featherweight against McGregor, or bantamweight vs. Dillashaw? Choices, choices…..

Stay tuned to LowKickMMA for more MMA and UFC news!