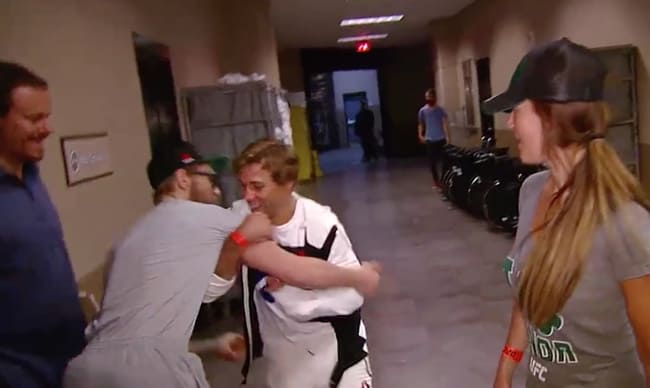 Following a backstage altercation at July’s UFC 189 that many felt was a bit staged, UFC fan favorites Conor McGregor and Urijah Faber signed on as opposing coaches of the upcoming The Ultimate Fighter (TUF) 22.

The pairing came with a lengthy back story pre-installed, as the ‘The Notorious’ just beat Faber’s Team Alpha Male teammate Chad Mendes on short notice for the interim featherweight title at UFC 189.

McGregor will now tentatively face Jose Aldo in the main event of December’s UFC 194, so he and Faber won’t be settling their differences in the octagon; at least not for now.

As a longtime top contender, Faber detailed his view of how a match with McGregor would play out in a recent interview with Submission Radio. Focusing on McGregor’s perceived deficiencies on the ground, his points weren’t all that much of a surprise:

“I’m a former champion, top contender for my entire career, I’m a very durable guy, but I have the most submissions in Pride, UFC and WEC history. So that’s one of the things I’ve excelled at, and that’s one of the things that Conor – and from what I’ve seen and from his past, he’s got two losses that are from submissions. We saw the way Chad was able to handle him on the ground.”

‘The California Kid’ said the fight would be a good match-up for him due to the ease with which Mendes was able to handle McGregor on the ground despite a very short camp to prepare. Faber said Mendes came in ‘off the couch,’ and even though the knockout specialist may have up to 20 pounds of walking around weight on him, the seasoned veteran stood firm in the belief that he would still submit him:

“So for me it’s a good match-up. Now is Conor a dangerous guy? He’s probably about, maybe 20 pounds heavier than I am walking around, which means I’ll probably be a little faster, he may be a little stronger. But it would be a dangerous fight of course, but for both of us. I’m confident I can submit him and I’m sure he feels like he can knock me out, and we both have trained in the other guy’s strengths. So I think it will make an interesting match-up. Our guy Chad [Mendes] rolled off the couch and basically had his way with him on the ground. So I think it’s a good match up.”

It may be tough to count Faber out on the ground, but he most recently lost to Frankie Edgar at May’s UFC Fight Night 65 and has unfortunately failed against all of the elite-class fighters he’s met in the octagon. With a torrid streak of finish wins to his name, McGregor would certainly fall into that category.

Is Faber just trying to hype the show, or would he legitimately give the Irish trash talker a hard time?