LowKickMMA.com
Home MMA News Urijah Faber: Conor McGregor Had An A** Crack Full Of Sweaty A**... 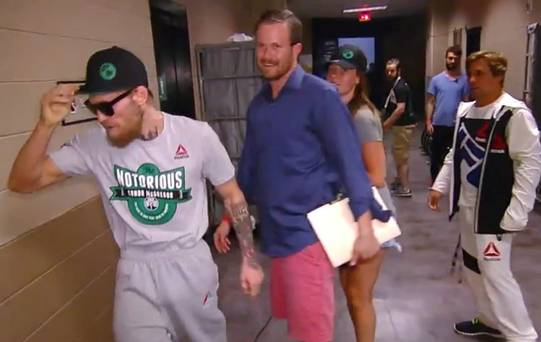 It’s no secret that Urijah Faber doesn’t like his enemy coach Conor McGregor on The Ultimate Fighter (TUF) 22.

The two had a highly publicized backstage confrontation at July’s UFC 189 in Las Vegas, where the ‘Notorious’ eventually stopped ‘The California Kid’s’ close friend Chad Mendes to take home the interim featherweight title in the main event.

Faber wanted to fight the hated Irishman, so much that he was even willing to face him in his native Dublin at October 24’s UFC Fight Night 76, but with ‘Notorious’ facing longtime champion Jose Aldo in the main event of December’s UFC 194, that wasn’t a realistic proposal.

So ‘The California Kid’ will settle for making fun of McGregor instead, recently telling MMA Fighting that the surging superstar mistakenly shows up to TUF practice in Vegas in a suit, something that isn’t exactly recommended in the desert:

“Let’s be honest here, Conor shows up every day, to practice, to everything, in the Vegas desert, in the full get up,” Faber said. “And he’s got armpit sweat coming out to here [gesturing across his back], at one point he has an ass crack full of sweaty ass, he rips his pants at one point.”

The Team Alpha Male continued on with his verbal warfare, insisting that the interim champ is like ‘poser’ MMA fan who wears Tapout and thinks he’s a fighter:

“I’m like, bro, what’s up with the outfit,” Faber said. “He’s like ‘I’m all business.’ I’m like, ‘dude, you’re like the Tapout guy at the bar who thinks he’s a fighter because he’s wearing Tapout.’ In this business world, Conor in a suit and tie is like the poser wearing Tapout. I had to educate him about business. Look at Dana White, Dana White will not put on a suit unless he’s forced to.”

The trash talk duel between Faber and McGregor seems to be reaching a fever pitch in the media, yet the fact that they are unlikely to fight anytime soon does take away some of the legitimacy of their beef.

McGregor is set to take on the decorated Aldo, and there just isn’t another fight for him right now, making a match with Faber a step down in scope for the ultra-popular ‘Notorious.’

‘Junior’ also demolished Faber when ‘The California Kid’ was a more dangerous contender, and although their rivalry will make for great television, it’s not a rivalry that makes sense for the beloved striker from the Emerald Isle.

But with his relevancy fading a bit after losses in most of the biggest fights of his otherwise solid MMA career, is Faber generating a beef with McGregor to stay in the public eye and line his pockets further? Or is it a true rivalry he thinks he could win?