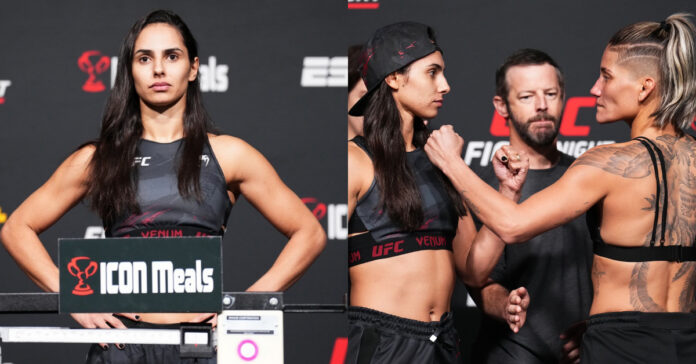 Ariane Lipski will no longer compete with Priscila Cachoeira at tonight’s UFC Vegas 59.

Lipski’s outing with Cachoeira was set to kick off the main card of the night at UFC Apex in Las Vegas, Nevada. However, it will no longer go through per new reports coming from Combate.

Taking to Twitter, the Brazilian outlet shared the update with a full report online. Not all is lost as the bout has not been canceled for UFC Vegas 59. Instead, Lipski will compete against Cachoeira on next Saturday’s card at UFC San Diego.

Previously, the welterweight bout between Jason Witt and debutant Josh Quinlan also got scrapped from tonight’s event and postponed to Aug. 13.

Fight-day cancellations aren’t a new thing in MMA. As heartbreaking as it is to see our favorite fights fall off the card, it’s something the fans have gotten used to. One of the most notable last-minute cancelations this year was of Donald Cerrone’s outing with Joe Lauzon, initially targeted for UFC Austin. For the first time in his career, Cerrone withdrew from a bout, citing food poisoning as the source.

With the removal of the women’s flyweight bout, it’s unclear if and which prelim fight might get bumped up to a spot on the main card. Former title challenger Thiago Santos will headline UFC on ESPN 40 in a light heavyweight competition against the Dana White Contender Series standout Jamahal Hill.

A top-ten ranked contender at welterweight, Vicente Luque, will take to the octagon against Geoff Neal, another top-15 contender in the co-main event of the night. The fight will give Neal a chance to go higher in the ranks. For Luque, it’s his opportunity to claw back into the mix of title contention after suffering defeat to Belal Muhammad in his last showing.