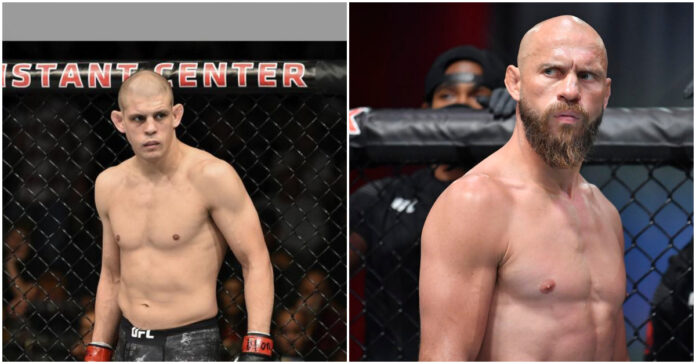 Joe Lauzon is out of his scheduled matchup with Donald Cerrone this Saturday at UFC Austin.

The two were initially paired up for UFC 274 last month but the contest was called off after Donald Cerrone suffered food poisoning from eating tacos. It marked the first time Cerrone had to withdraw from a fight and the pair were moved to another date for their matchup.

Joe Lauzon vs. Donald Cerrone called off for UFC Austin

This time around, Joe Lauzon has pulled out of the bout, again on fight day like Cerrone, due to health issues. Ariel Helwani broke the news of the fight being called off first on Twitter.

The grizzled veterans Lauzon and Cerrone have been a longstanding fixture of the UFC. Lauzon has remained out of competition for about three years since his last outing against Jonathan Pearce in October 2019, a bout he won via TKO.

Meanwhile, Cerrone has been the more active fighter competing four more times after Lauzon’s latest outing. While Cerrone has contested in more bouts, he has dropped five out of his last six with one no contest. His last win came in 2019, the same year Lauzon last made the walk to the cage.

UFC President Dana White had indicated that the loser would leave town, making it a retirement fight for at least one of the two. However, there has been speculation that it may serve as the final bout for both men regardless of the victor.

It remains to be seen how the UFC decides to proceed ahead, whether they rebook it to a later date or cancel the idea altogether.