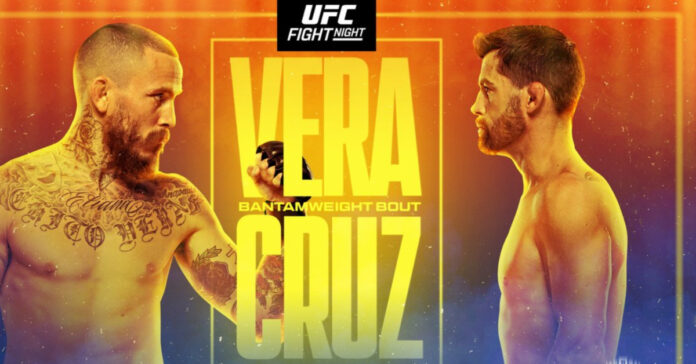 As the UFC continues to expand its horizons in a post covid landscape, the promotion takes a trip to San Diego with an electric bantamweight main event. Former 135lb champion Dominick Cruz is set to take on surging contender Marlon Vera in the headlining bout, a fight that may well decide the next No.1 contender in the division.

The card is full of interesting matchups although there is not a tremendous amount of value on a single ML play. As a result, two of our three recommended bets this week will actually be parlay pieces.

Join us at LowKickMMA as we break down some of the fights from UFC San Deigo, and try to make some money in the process.

One single ML play we will take is on Youssef Zalal to defeat Da’mon Blackshear. Zalal is making the move down to 135lbs for the first time in his UFC tenure. ‘The Moroccan Devil’ was initially set to take on Cristian Quiñonez, however, after the Mexican dropped out, Blackshear was brought in on short notice.

Blackshear is admittedly riding an impressive four-fight winning streak, with all four victories coming under the CFFC banner. However, whenever Blackshear has come across opposition on a similar level to Zalal, he is fallen short. Losses to Danny Sabatello, Pat Sabatini and Kris Moutinho all mar his record.

Zalal has a good build for the 135lb division, which paired with his speed and high work rate will likely be enough to outwork Blackshear over three rounds. We will take Youssef Zalal’s ML, which Betway have priced at 1.72.

For our second bet, we are parlaying two main card bouts.

First is Lupita Godinez to defeat Angela Hill. Godinez has looked sensational as of late, racking up three wins in her last four bouts. The Mexico-born strawweight is an elite chain wrestler who can cause her opponents endless trouble when the fight hits the mats. She takes on Angela Hill, in a fight that came together on relatively short notice. Hill is as game as they come, but has struggled against strong opponents with heavy wrestle-based games in the past.

The second leg of this parlay is for the flyweight bout between Cynthia Calvillo and Nina Nunes to go past the first round and a half. This one is a simple pick, just to boost the odds up in our favor. Nina Nunes has gone to the third round in seven of her last right, whilst Cynthia Calvillo has gone to the third in eight of her last nine (debatably seven as she retired at the end of the second round against Angela Lee with a broken hand).

By pairing these bets together, we have a solid 1.67 line on Betway.

Our third bet for UFC San Diego is yet another parlay.

First is a straight play on Bruno Silva. ‘Blindado’ is a monster of a middleweight, with brutal knockout power and an iron chin. Currently 3-1 in the UFC with his only loss coming against the next title challenger Alex Pereira, Bruno Silva is a problem for any man. This weekend he takes on UFC veteran Gerald Meerschaert, a slick submission specialist with nine finishes inside the UFC. However, Meerschaert has repeatedly struggled with heavy-hitting opponents, suffering KO losses to Ian Heinisch, Thiago Santos and Khamzat Chimaev. There are few that hit harder than Silva, and as a result, a KO, or at least multiple round winning moments, seem inevitable.

Second, we take the main event to go over two and a half rounds. Dominick Cruz is an expert at fighting to the distance, whether it be over three or five rounds. Over the course of his time with the UFC and WEC, he has gone to the judges 13 out of 17 times. He is immensely durable but doesn’t contain one-punch knockout power in his hands. Marlon Vera is one of the few fighters in the division who boasts a similar level of durability. He also has a tendency of starting slow, only turning up the pressure in the later rounds. This fight may end inside the distance, but it seems more than likely that this would only happen in the championship rounds.

A two-piece parlay of Bruno Silva’s ML and Cruz vs. Vera to go over two and a half rounds is priced at 1.75 on Betway.

Do you agree with our three bets for UFC San Diego?