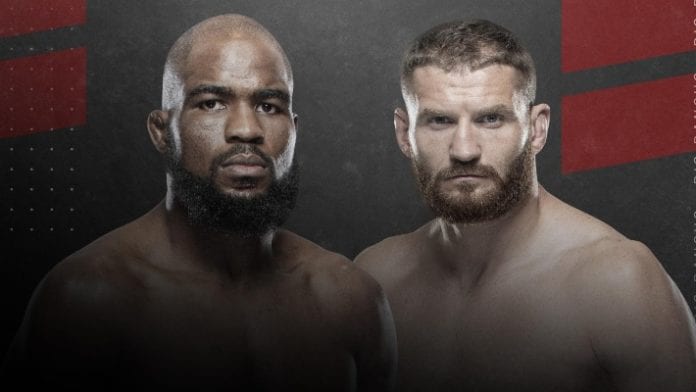 The winner could very well be next in line to challenge Jon Jones for the 205-pound title. We here at LowKickMMA have compiled our UFC Rio Rancho staff predictions for the Anderson vs. Blachowicz main event. Check them out below.

The winner of this fight is likely next in line to challenge Jon Jones, and Corey Anderson has been on the hunt for “Bones” for quite some time. Anderson already has a win over Blachowicz, who could certainly end the fight with his power, but I expect Anderson to showcase more of his wrestling and ride this one out to a decision win. (Prediction: Corey Anderson)

Although Corey Anderson dominated Jan Blachowicz in their first meeting, and is on a four-fight winning streak, I feel the latter has improved much more since then. Especially based on his recent performances. I have to go with Blachowicz getting the finish within three rounds. (Prediction: Jan Blachowicz)

I expect Corey Anderson to finally get the statement win that earns him a title shot. On paper, this is a pick-em fight but I give the edge to Anderson for a few reasons. His age, form, attitude and his previous win over Jan Blachowicz make him the favorite in my eyes. Although it won’t be easy and he’ll most likely need every minute of the five rounds to get this one done. (Prediction: Corey Anderson)

What do you think about our UFC Albuquerque staff predictions?