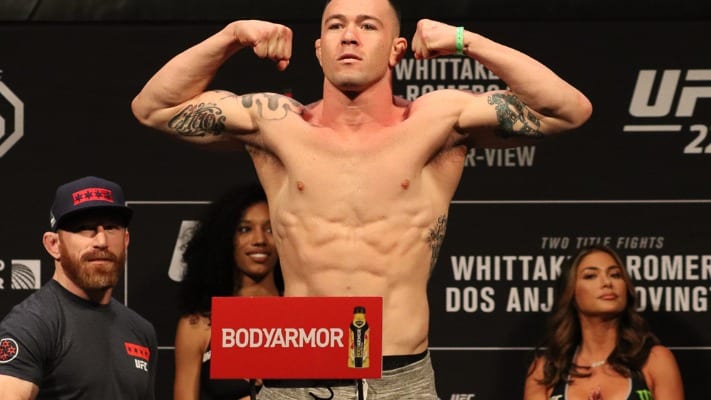 Covington comes in aggressive and is throwing heavy leather with Lawler. He tries to clinch up a few times but is unable. Covington in on a takedown against the cage now. “Chaos” gets a brief double leg but Lawler is right back up to his feet. Knees to the body for Lawler.

Leg kicks from Covington to open the round. Covington comes inside with nice hooks and gets the takedown. Lawler to his feet and Covington lands an elbow and is in on the takedown again. Covington misses on a spinning elbow and Lawler circles out and lands a leg kick.

Nice kick to the body lands for Covington. Lawler walks Covington down but he’s not throwing any shots.

Lawler comes in with a hard shot but Covington responds with one of his own and begins pouring on the volume. Covington has Lawler backed up against the cage. Covington continues to land nice combinations.

Covington comes out pressing the action. He continues to land good shots and lands a nice left hook. More high volume shots from Covington against the cage before he goes for a takedown, but it’s stuffed. Lawler lands an uppercut in the clinch.

Covington is pressing the action but Lawler is staying right in his face. Covington backs Lawler against the cage and is in on a takedown again, but Lawler shoves him off. In the clinch, Covington lands some knees but now Lawler responds with big hooks. An overhand lands for Lawler and he’s walking Covington down now. Jabs from Covington but Lawler connects with hard body shots.

A nice uppercut lands for Lawler in the clinch again but Covington continues with the volume strikes. Now Lawler is coming in hot. Kicks to the body from Covington. Lawler coming in with seconds left and Covington is exchanging with him, circling and moving away. A spinning back fist lands for Covington as the round comes to an end.