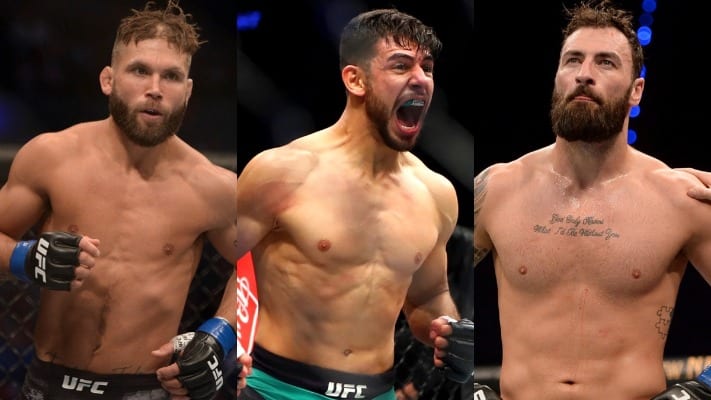 This past weekend (Sat. September 21, 2019) at UFC on ESPN+ 17, we had a great night of fights and quite the underwhelming main event. The event featured twelve fights, seven of which went the distance, with three knockouts, one submission, and of course the no contest in the main event.

The show was headlined by top ten featherweights Jeremy ‘Lil Heathen’ Stephens and Yair ‘El Pantera’ Rodriguez, but we didn’t get much of a show like we thought we would. Just 15 seconds into the fight and it was over, Rodriguez had poked Stephens in the eye, so bad in fact that after Herb Dean gave Stephens the allowed five minutes to recover, his eye still wouldn’t even open.

The timeline for these two works out quite beautifully, considering Misha Cirkunov just fought the weekend before last, and of course, Paul Craig just had his fight this past Saturday as well. Both had the best performances they’ve had inside the UFC to date. Cirkunov submitted the highly touted, young prodigy in Jimmy Crute with a Peruvian necktie, and Craig got just his second win inside the UFC without having lost the majority of the fight before finishing it.

It was a bit surprising that the UFC didn’t cut Craig after his most recent loss to Alonzo Menifield. He was then 3-4 inside the promotion at that point, he’d gotten finished in all four of his losses, and two of his three wins were in the final moments of fights he was losing. Craig was getting mauled by Magomed Ankalaev the entire fight, and got the tap via triangle choke with literally one second left in the fight. Then against Kennedy Nzechukwu, he was losing that fight as well, and ended up sinking in a triangle choke and got the tap with 40 seconds left.

The only fight Craig had really looked good in was his UFC debut, a back-and-forth fight that saw him win via armbar in round two, until UFC Mexico that is. He looked great this past Saturday, he’s certainly been putting in the work. After hurting Vinicius Moreira badly and almost getting the stoppage via strikes, Craig jumped on his back and sunk in the rear-naked choke for the victory over the BJJ black belt. He shouldn’t have even had to do that to be honest, that fight should’ve been stopped via TKO before Craig even had the chance to take Moreira’s back. Nonetheless, it was an incredible performance from “Bearjew”.

Cirkunov submitted the only fighter to ever submit Craig in his last fight; as mentioned above, Cirkunov defeated Crute via peruvian necktie, while Crute submitted Craig via kimura after dominating him for over 14 minutes. Cirkunov has also been submitted before, but not since his first and second losses in 2010 and 2012. Wouldn’t this be a great grapple-fest to see? Both guys have had somewhat of a rocky road in the UFC, with some success as well, but both are highly skilled and incredibly entertaining. How would this one go?

Irene Aldana had one of her best performances to date at UFC Mexico as well, as she easily out-struck Vanessa Melo 127-68 in total strikes over the course of three rounds. Aldana’s striking looked great, especially her hands. The combinations she threw, and her shovel hooks, in particular, she’s evolved in the game quite nicely.

Aldana came to the UFC with a 7-2 record, finishing all of her wins. After going 0-2 in her first two UFC outings, she’s since gone 4-1, with that only loss via split decision to Raquel Pennington, a fight that could’ve gone either way. A fight that’d be great to see her in now is one against The Ultimate Fighter 18 winner Julianna Pena, who successfully returned after two-and-a-half years away this past July.

With Aldana at 31-years-old, and Pena at 30-years-old, this is a great time to make this fight while they’re both at, or close to their peak. How does this one go down?

Sergio Pettis just defeated the debuting Tyson Nam by out-striking him 96-43 in total strikes to a unanimous decision victory. Nam was certainly the underdog, but he’s a great fighter, and he belongs in the UFC. Pettis’ first fight with Formiga happened just after Pettis beat Joseph Benavidez, it looked like he was about to be fighting for the title. He came out and did well in round one, but got taken down toward the end of round two, and got his back taken for the entirety of round three.

Pettis recently said that his head wasn’t completely in that fight because he heard the flyweight division was going to be cut, and all of his hard work wasn’t worth anything considering. He then moved back up to 135 pounds to fight Rob Font after losing to Formiga and suffered back-to-back losses for the first time ever in his career. After not having a fight for nine months, he came back and defeated Nam.

Let’s see how much Pettis has improved since then, we all know how good he is. Look at his fight with Benavidez, that’s what he’s capable of. Yes, that was a close fight, but Benavidez is the No. 2 flyweight out there, maybe even No. 1, he does boast a win over Henry Cejudo. Also, “The Phenom” almost knocked Benavidez out in the first round of their fight. A rematch with Formiga makes all the sense in the world at this point.

A draw was the perfect result for this fight because there was no winner or loser. This fight was so close, yet so competitive and so entertaining, it’d be a shame if we don’t get to see this one get run back. With Moreno being the former MCC flyweight champion with three title defenses before coming to the UFC, then going 3-2 inside the UFC, getting cut, then winning the LFA flyweight championship via TKO in round four, it’s great to see that the UFC picked him back up.

On the other hand, Askarov is the former ACB flyweight champion, and we all see why now. This man can fight, and he’s only 26-years-old, just a year older than Moreno. Rounds one and two showed the two striking each other, primarily Moreno having more success than Askarov, but Askarov had a few nice takedowns and a good amount of back control at one point in each of the first two rounds. Round three was the only clear round to score, which was Moreno’s round considering his beautiful trip and top game kept him on top for the majority of the round.

It’s great that to see that one judge scored this fight 28-28, we don’t see that very often. Unless the referee takes a point, we almost never see an even round, but we should. Even rounds shouldn’t be scored often, perhaps not even at every event, but they’re absolutely necessary when a round is so close.

Most of the time, if a round is close, the judges will just give it to the more popular fighter, or maybe even the hometown fighter, that’s not how it should be. If the round is that close to where they don’t know who to give it to, a 10-10 score is a great idea and should be implemented more often.

These are two of the best flyweights on the entire planet, and it’s great to see both of them inside the UFC. Why not run this one back? It was one of the best fights of the night, and probably should’ve gotten the Fight of the Night award. What do you think, would you like to see it again?

Again, yet another fight needs to be run back. We only got to see 15 seconds of this contest, and before we knew it, it was over. Rodriguez ended up poking Stephens in the eye, thus resulting in a no contest. Stephens has already made a video post stating “Yair, you think I’m faking bro? You’re the one that poked me in the eye. Let’s run it back… four or five weeks, two weeks, whatever, I’ll be ready.”

This was about to be a great, entertaining contest between two incredibly dangerous featherweights. We have the brutal power of Jeremy Stephens and the stunning footwork and lethal skill set of Yair Rodriguez. Who knows how it would’ve went, it’s impossible to say. Hopefully, we can get Rodriguez to agree to the rematch and sign the contract again.

If this fight was signed again, how do you think it would go? It’s so unfortunate to have an event end like that, especially one that was as exciting as this one was. We really had some great fights, and to have it just end like that, it sucks, but it’s part of the sport.

Do you think Rodriguez will sign another contract to fight Stephens again?