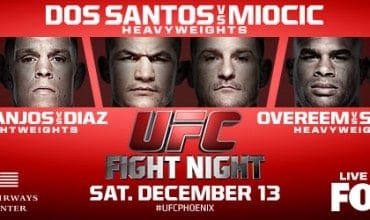 The main event featured the long-awaited return of former heavyweight champion Junior dos Santos, who threw down with rising No. 4 contender Stipe Miocic. Dos Santos was able to defend a few takedowns attempts in round one, but ate some big shots in the process, having to show off his iron chin. JDS landed some huge shots of his own to end a very close first round, one Miocic may have edged out. Miocic took a page out of Cain Velasquez’s book in round two, pressuring dos Santos and landing huge shots. He scored a late takedown and left JDS bloodied to take the round. After missing on some huge shots to open up the round, JDS begin using his jab to the body and eventually nailed Miocic coming in and dropped him. The Croatian avoided being finished, but the third went to dos Santos.

Dos Santos continued mixing it up to the head and the body, but Miocic kept pushing forward and landed some huge shots. Up against the fence, JDS was able to swiftly take down Miocic, but couldn’t hold him there. The two slugged it out on the feet to end a very close round four. In a round that may have decided the fight, JDS came out in the fifth and was clearly more active than Miocic, simply out boxing him. However, towards the end of the round, Miocic began to land some big shots as well. The two men slugged it out until the bell to end a very close and very bloody five-round war. Ultimately, JDS took the decision.

Another high-profile return took place in the co-main event when outspoken bad boy Nate Diaz met ultra-dangerous Rafael dos Anjos in a crucial lightweight scrap. Dos Anjos came out as the aggressor, landing brutal leg kicks that had Diaz wobbling. He then took the Stockton bad boy down and remained on top to end round one. RDA continued to brutalize the leg of Diaz in round two, while busting him open with a left hand. Dos Anjos ended up on top once again to secure another dominant round. Dos Anjos grabbed a powerful double leg takedown in the third and controlled Diaz the whole round to secure a very one-sided decision win.

A third fighter returned to the octagon as well, as Stefan Struve faced off with the skidding Alistair Overeem in his first bout since a UFC on Fuel TV 8 loss to Mark Hunt. Overeem hit a smooth takedown and after remaining in Struve’s guard for the majority of the round, he began to rain down heavy shots and ended up spoiling Struve’s return party to score a TKO win.

The main card was kicked off by heavyweight finishers Matt Mitrione and Gabriel Gonzaga. Mitrione came out firing, making quick work of Gonzaga by landing a big left hand that dropped him, following up with ground strikes to put Gonzaga away inside of two minutes.