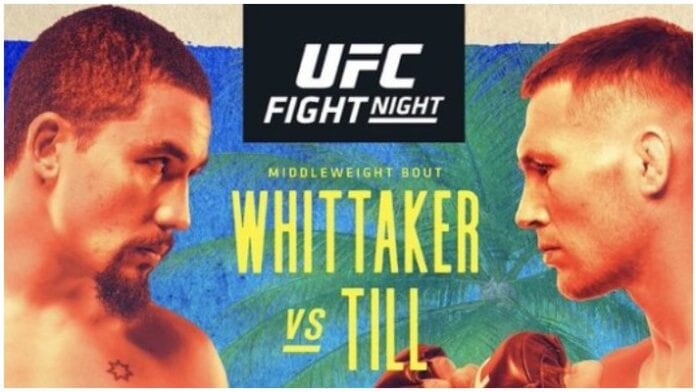 The island hosted the main event bout in the Middleweight division between former champion Robert Whittaker and former Welterweight title challenger Darren Till. This fight saw Whittaker strengthen his position as the #1 contender in the division after defeating Till by unanimous decision. In the co-main event, we were treated to a trilogy fight between two MMA veterans Mauricio Rua and Antonio Rogerio Nogueira. The conclusion to the trilogy spanning over the last 15 years saw Shogun Rua take out his third victory by split decision. Following this Nogueira announced that he would be retiring from the sport. Outside of these fights, there were many moments on the card warranting of bonuses.

The First of many Performance of the Night bonuses given out goes went to Tanner Boser for his TKO victory of Raphael Pessoa midway through round number two.

The Second Performance of the Night came during the preliminary card when Tom Aspinall made his debut finishing Jake Collier quickly into the first round by TKO.

The Third Performance of the Night bonuses went to Jesse Ronson for his first round submission victory over Nicolas Dalby.

The Third Performance of the Night went to Khamzat Chimaev for his dominant victory over Rhys Mckee to open the main card. What was a record-breaking return to the octagon for Chimaev after his debut only ten days prior, saw him completely dominate his opposition immediately securing a takedown and landing ground and pound until the ref called it off. Chimaev took 0 strikes in this impressive bonus winning performance.

The Fifth Performance of the Night bonus went to Pual Craig when he finished Gadzhimurad Antigulov by triangle choke in the third round, adding another triangle choke submission to his record taking the total to three.

The final Performance of the Night bonus went to former heavyweight champion Fabricio Werdum as he welcomed Alexander Gustafsson to the heavyweight division submitting him with an armbar in the first round.