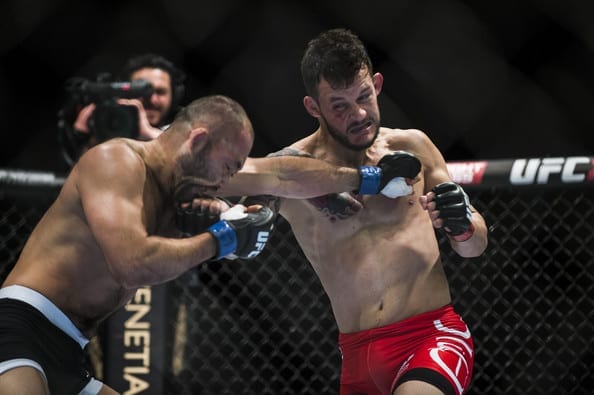 The UFC Fight Night 79 main card got off to a great start with Doo Ho Choi’s massive knockout win, and Yoshihiro Akiyama took on Alberto Mina at welterweight in the next fight. The 40-year old Korean/Japanese star ‘Sexyama’ looks ridiculously ripped for his age.

The fans are behind Akiyama, Bruce Buffer announces him in his Korean name Coo Sung Hung. They exchange powerful low kicks to start the round, ‘Soldier Of God’ winging hooks. Spinning shit from Akiyama, but Mina begins to find his range.

More nice low kicks from ‘Sexyama’ as he tries to work, Akiyama needs to counter Mina’s sloppy kick with an overhand right. Mina with a low left hand, the crowd chants ‘sexy.’ He stuffs Mina’s takedown attempt, now they exchange nice right hands. Mina with a takedown, close round one.

Mina’s leg is swole but he’s moving well, Akiyama rocks with the right hand, the Brazilian hurt now. He’s limping from the kicks, and now a monster uppercut, Mina is getting tagged! The Brazilian looks terrible now, very sloppy movement.

Nutshot from Mina. More unsuccessful hayemakers from Mina, but he lands a nice left. Akiyama goes down, he’s all over the place! Saved by the buzzer, and it’s on to round three. Akiyama looking fresher, lands a big right hand.

Now an uppercut drops Mina, and a left hook, another uppercut. This is an ugly fight! 2-3 combo from Akiyama, Mina beckons for guard, no chance. Akiyama lighting Mina up with punches, he flops again. Crowd jeers. Mina is done, he flops and Akiyama jumps him.

Big punches from half guard and they stand. Mina flops again, Akiyama swarms again, round ends.