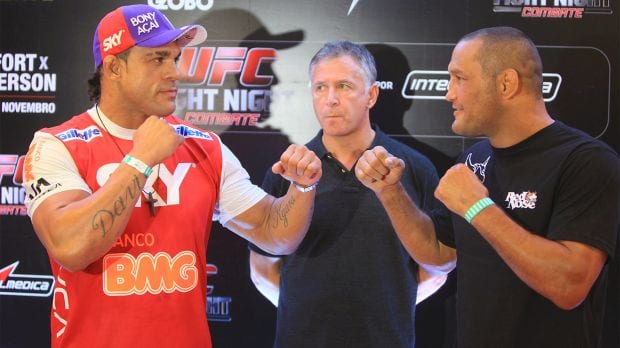 The world’s largest mixed martial arts (MMA) promotion returns this weekend as UFC Fight Night 77 will go down on Saturday (November 7, 2015) from Sao Paulo, Brazil. The main event features an intriguing trilogy bout between two legends of the sport in Vitor “The Phenom” Belfort and Dan “Hendo” Henderson.

Henderson got the nod the first time around, scoring a unanimous decision victory back in 2007, but it was Belfort who shut “Hendo’s” lights off with a head kick knockout in 2013.

Now, it’s clear that both men are mere shells of their earlier forms. Both are undoubtedly past their prime, but the bout could still potentially produce fireworks due to the style of both fighters.

Without further ado, let’s take a look at the Vitor Belfort vs. Dan Henderson breakdown below:

This category was an easy one to call for me. Throughout his lengthy career, Henderson has possessed a deathly ability that not many men have: the ability to put a man to sleep with one shot. “Hendo’s” right hand has become known as the “H-Bomb” and for good reason as he holds an impressive 15 knockouts to his name.

Besides the right hand, however, Henderson has been limited on the feet which can’t be said about Belfort. “The Phenom” remains as one of the most vicious and aggressive strikers in the history of the sport, packing a vast and diverse arsenal of attacks.

Although he won’t be the same TRT (testosterone-replacement-therapy) fueled monster that blasted Henderson in 2013, I still feel as if Belfort, who owns 17 career knockout wins, is the faster, more powerful, and simply more well-rounded striker. 55-45 Belfort.

Unlike the striking category, this category undoubtedly sways towards the American. Henderson is a former Greco Roman Olympian who lands more than half of his attempted takedowns inside of the cage. Although he has seemed to move away from his roots in recent bouts, “Hendo” should look to take Belfort down in this bout.

As for “The Phenom”, he tends to like to strike more than wrestle, and has shown shaky takedown defense in the past. In his last bout for example, Belfort was taken down rather easily by champion Chris Weidman. Of course Weidman is a different type of animal, but I feel as if the former Olympian holds the advantage here. 55-45 Henderson.

While Henderson may have the upper hand in terms of getting the fight to the ground, Belfort is in no way a slouch once the action hits the canvas. “The Phenom” holds black belts in Brazilian jiu-jitsu, and Judo. Despite only holding three submission victories to his record, the Brazilian remains comfortable on the ground.

While he has also been submitted twice, I don’t think Belfort has to worry about Henderson securing a fight ending lock. The American only holds two submission victories with no formal ranking in jiu-jitsu. It may be true that neither man is known for his submissions, but I feel as if “The Phenom” may be the ever so slightly more skilled grappler. 55-45 Belfort.

This fight is definitely a difficult one to call. With the score being split, and each combatant at the tail end of an illustrious career, it should be interesting to see who prevails on fight night.