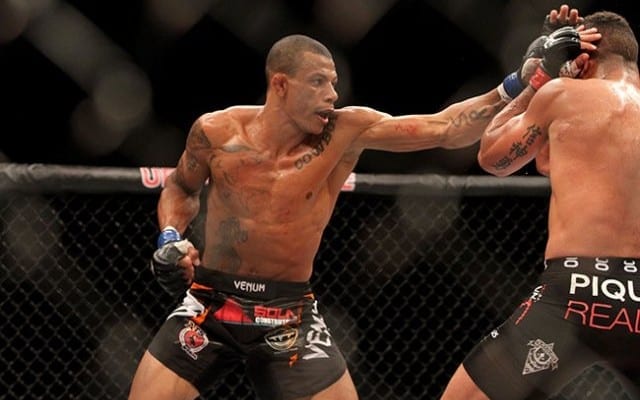 It’s once again fight day here at LowKickMMA, and the talent on display tonight (Saturday June 27, 2015) will come from the Seminole Hard Rock Hotel and Casino in Hollywood, Florida, in the form of UFC Fight Night 70. Headlining the card are Lyoto Machida and Yoel Romero, but there’s a whole bunch of great fights also taking place on the preliminary section of the card.

Joe Merritt vs. Alex Oliveira closed the preliminary card on Fox Sports 2 in a fantastic fight. The Brazilian ‘Cowboy’ sought and secured a few takedowns early, but Merritt had great transitions and reverses. Oliveira continued to seek for a rear-naked choke that he just couldn’t finish the fight with. Oliveira would go on to beat Merritt by unanimous decision.

Lewis Gonzalez vs. Leandro Silva in a welterweight bout was next. Both guys gave what they could in this fight. Silva looked solid with his wrestling, but needs to work on his positioning for submissions. Silva would go on to earn a decision victory.

Steve Montgomery met champion boxer Tony Sims at welterweight. After the feeling out process ended, Sims landed a sick straight left hand that dropped Montgomery and then finished him on the ground.

Opening the UFC Fight Night 70 on Fox Sports 2 prelims was Sirwan Kakai vs. Danny Martinez. Round one was a great opening frame with both men swinging for the fence. Kakai hurt Martinez midway through the round with some knees to the jaw line of Martinez. After that, it was a solid fight that neither fighter did any damage. At the end of the night, Sirwan Kakai got his hands raised.

So join us right here at LowKickMMA for Lyoto Machida vs. Yoel Romero, kicking off at 8:00 PM ET!