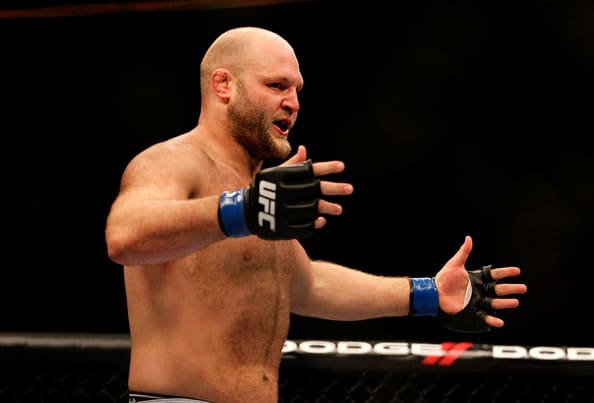 Rising heavyweight slugger Matt Mitrione was on the hunt for his fourth straight win against ‘Big’ game in veteran Ben Rothwell in the co-main event of tonight’s (Sat., June 6, 2015) UFC Fight Night 68 from the Smoothie King Center in New Orleans, Lousiana.

Mitrione had finished off Shawn Jordan, Derrick Lewis, and Gabriel Gonzaga in rapid succession, while Rothwell brought the momentum of a huge upset win over Former Strikeforce and DREAM champ Alistair Overeem.

With so much power colliding in a match of heayweight freight trains, this bout wasn’t destined to last long.

The fight started with Mitrione moving and Rothwell stationary, and ‘Meathead’ jumped in with some quick shots. He landed a hard right hand and a lunging combo, and ‘Big Ben’ snapped some counters of his own. He rushed forward with punches and knees, but then Mitrione fought back. The former NFL player landed a hard body kick and some punches, looking for a takedown that Rothwell defended well.

He capitalized by locking on a tight modified guillotine that had Mitrione immediately tapping due to what must have been massive pain.