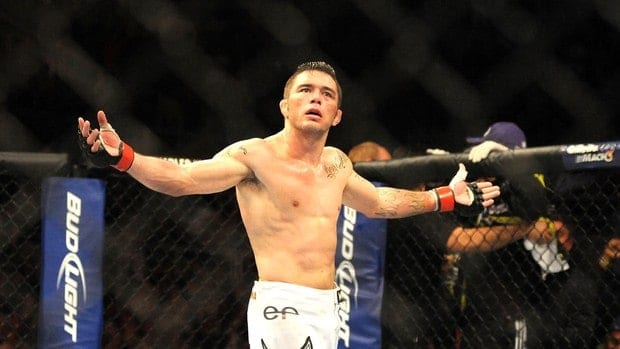 The UFC will be hosted by Goiania, Brazil tonight (Saturday May 30th) as UFC Fight Night 67 is set to kick off at 7 PM ET. The main event features former UFC welterweight title contender and interim boss Carlos Condit, as he hopes to blow the cobwebs away after a 14-month sit. Thiago Alves will attempt to spoil the parade, and also put his name in to the mix for a potential second title shot down the line.

Rony Jason and Damon Jackson will duke it out at featherweight in the feature prelim bout. Flying knee opens the fight by Rony, Jackson takes him down and works some strikes. Illegal knee by Jackson, they restart and Jackson locks up a tight triangle arm bar for the submission win, great performance by the Brazilian.

A flyweight collision between Wilson Reis and Jussier Formiga should be good.Formiga’s dominant ground game was the story of this fight, as the Brazilian beat’s his countryman on the scorecards unanimously.

Nick Dalby and Elizeu Zaleski threw down fir tree hard rounds, with both fighters really putting it on the line. Late flurries from Zaleski weren’t enough for the judges, as Dalby walked away with the split decision.

Up next was a pairing between Mirsad Bektic and Lucas Martins at 145 pounds, opening the FOX Sports 1 prelims. Bektic controlled the fight throughout, smothering Martins with wrestling in round one, and finishing him in round two. A huge right hand was the beginning of the End for Martins, who was bleeding badly when the ref stepped in.

Juliana Lima and Ericka Almeida will face off at women’s straw weight. The first round was spent mainly with Lima in top control, as was the second but with a little stand up action at the round’s close. A tad more kickboxing in round three, but it was more like a sparring session. This fight sucked. Lima by decision. The judges 30-25 scorecard was more fun than this fight.

Opening the UFC Fight Pass prelims is a welterweight affair between Tom Breese and Luiz Dutra, and it was a great debut on short notice for Breese. He clocked Dutra with a right hand, who seemed to tire before the end of round one, and finished with 20 punches on the mat.

So join us right here at LowKickMMA on antoher UFC Fight Night, kicking off at 7 PM ET!