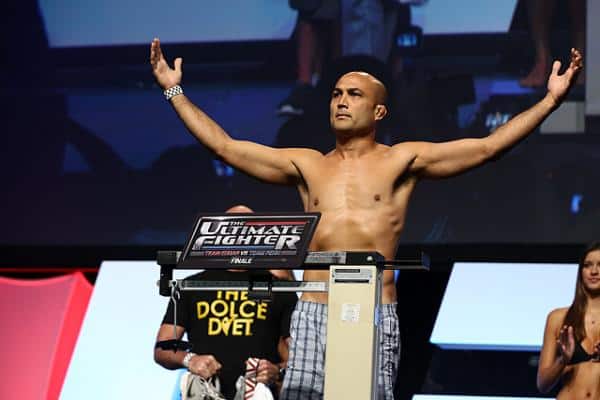 UFC Fight Night 103 goes down in Talking Stick Resort Arena in Phoenix this Sunday. Today’s weigh-ins feature the card’s main event headliners BJ Penn & Yair Rodriguez hitting the scales. After retiring in 2014 on the back of three straight losses, the former two-weight world champion looks to return with a win. Often hailed as the greatest lightweight of all time, Penn will again compete as a featherweight. Looking to spoil ‘The Prodigy’s’ big comeback is red-hot prospect Yair Rodriguez, undefeated in his UFC career, and his last loss was five years ago.

Since winning The Ultimate Fighter Latin America, Rodriguez has compiled four straight wins. Victory against Penn would be a huge stepping stone, but if he’s motivated, who knows what the former champ will bring. Lightweight veteran Joe Lauzon battles Marcin Held in the evening’s co-main event, and Court McGee meets Ben Saunders.


READ MORE:  Khabib Nurmagomedov Reveals His Celebrity Pick For A Fight: "I Can Take Him Down"