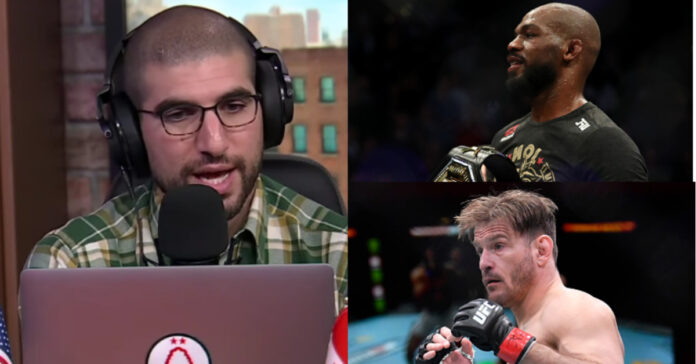 The long-rumored heavyweight bout for UFC 282 between Jon Jones and Stipe Miocic appears to be dead in the water.

It’s been nearly three years since we last saw Jon Jones inside the Octagon. The former light heavyweight champion vacated his title following another successful defense against Dominick Reyes at UFC 247. Since then, Jon Jones has been focused on building muscle for a move to the heavyweight division. His long-awaited heavyweight debut appeared to be closer than ever as rumors swirled about a potential late-2022 return against former heavyweight champion Stipe Miocic. It now appears that fight is off the docket.

Renowned MMA journalist Ariel Helwani spoke about the breakdown in negotiations for the heavyweight matchup on a recent episode of ‘The MMA Hour‘ on YouTube. Helwani believes it came down to the UFC refusing to “come correct” with their offer to Miocic.

“I think once they didn’t really come correct with an offer – and that’s really what happened here,” Helwani said. “It was like a ‘Hey, you wanna fight him, here’s the amount, take it or leave it.’ And [Stipe Miocic] was like ‘Uuuuh,’ and then they just moved on.

As the UFC Pivots to Jon Jones vs. Francis Ngannou, Ariel Helwani Believes Stipe Miocic May Call It a Career

With the promotion now eyeing a heavyweight title fight between Jon Jones and UFC heavyweight champion Francis Ngannou in early 2023, Helwani believes we may never see Stipe Miocic step inside of the Octagon again.

“I honestly wouldn’t be surprised if this marks the end of Stipe’s career,” Helwani stated. “Stipe is going to go off into the night very quietly. Stipe was never going to make a big hullabaloo. Maybe it’s a [social media] post or something like that. He’s a pretty quiet guy, private guy, likes his life as a firefighter. He was not going to make a big deal of the end of his fighting career.”

Should this be the end of Stipe Miocic’s career, the Cleveland native will undoubtedly go down as the greatest UFC heavyweight of all time.