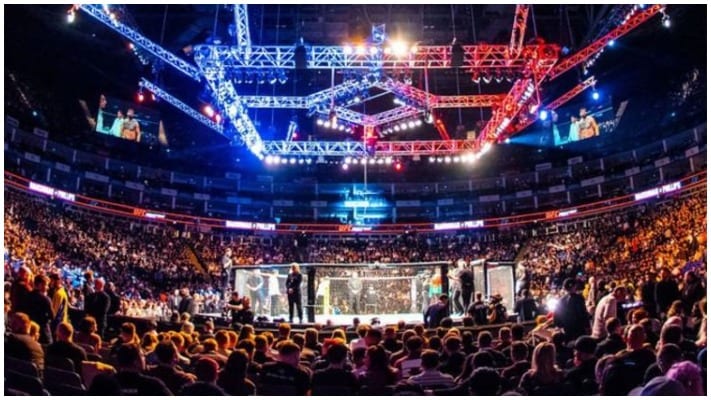 Sounds like the UFC could be returning to Europe by the end of summer, and more specifically London in August.

This was first reported by ESPN’s Ariel Helwani, who says that although nothing has been finalized or discussed beyond initial considerations, it appears the UFC is seriously considering booking a card in the city sooner rather than later.

If the rumored idea comes to fruition, this would mark the promotion’s first card in London since the Darren Till vs. Jorge Masvidal Fight Night card in 2019. The UFC had originally planned to book a fight between welterweights Leon Edwards and Tyron Woodley scheduled for May 2020 before the COVID-19 pandemic changed those plans.

The United Kingdom is home to many high-profile stars in the UFC; including Edwards, Till, newly-signed Paddy Pimblett, and former UFC middleweight champion, and current television analyst Michael Bisping.

This would also mark the first card held in another country outside of the USA and UAE since the start of the COVID-19 pandemic. England is reportedly pressing ahead with their original plan of easing COVID restrictions in the country beginning on May 17th, including allowing people to congregate indoors including at sports and entertainment venues.

The rate of COVID-19 cases has continued to decline over the past few months with the increase of vaccinations around the country.

This would also offer a perfect opportunity to book Pimblett, one of the latest and most popular signings by the UFC. Pimblett, a native of Liverpool, is a former featherweight champion in Cage Warriors and hasn’t fought in the UFC since he was signed earlier this year. Rumored opponents include Julian Erosa and Jared Gordon.

It’s almost certain that if and when the UFC returns to London, they will book a star-studded card for fans to enjoy after having suffered through the challenges of COVID-19 over the past year.

What is your reaction to the UFC possibly returning to London this year?