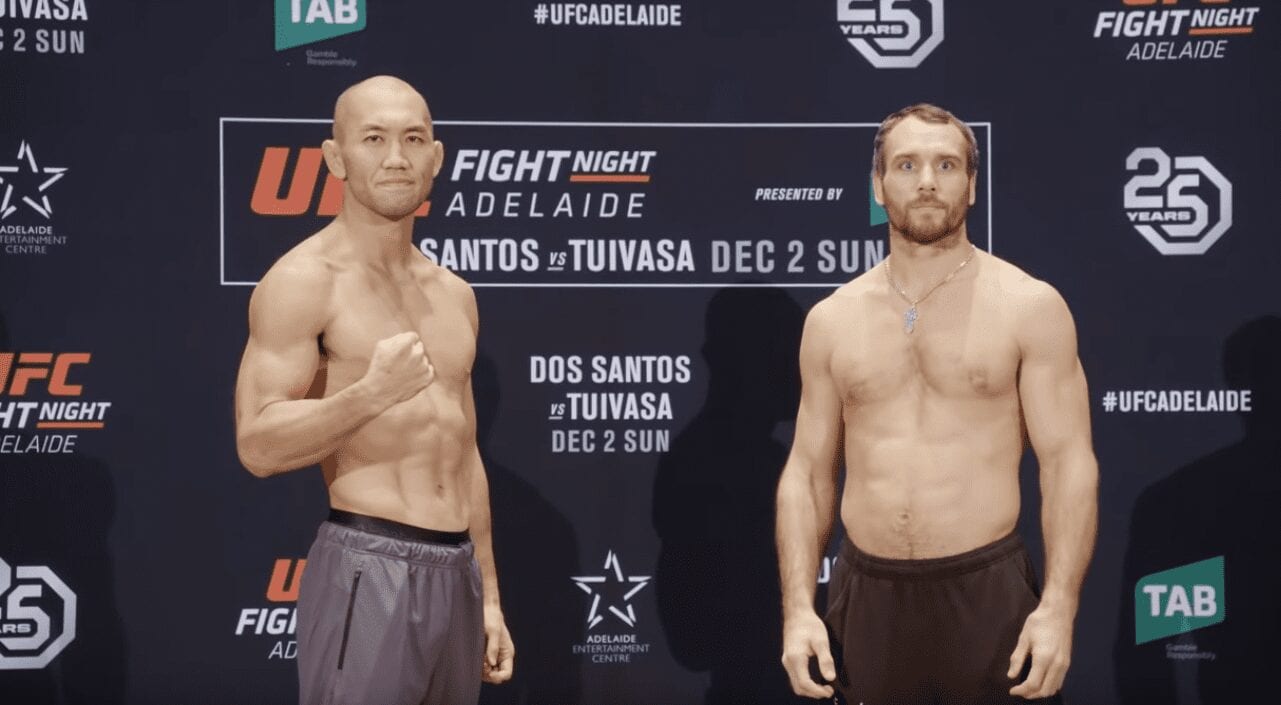 UFC Adelaide preliminary card results are underway as the Las Vegas-based promotion holds this latest event on television for fight fans around the world to watch the show.

It’s once again fight day here at LowKickMMA, and the talent on display tonight (Saturday, December 1, 2018) will come from in the form of UFC Adelaide. Headlining the card are Junior Dos Santos and Tai Tuivasa, but there’s a whole bunch of great fights also taking place on the preliminary section of the card.

Alexey Kunchenko vs. Yushin Okami in a welterweight bout closes the preliminary card on FOX Sports 1. In round 1, Okami shoots a long double-leg. Kunchenko sprawls and makes him pay with four or five hard shots to the ribs. Okami presses Kunchenko against the fence, but no action is forthcoming so the referee resets them. Landed some stinging body shots, kept Okami off him for the most part. In round 2, Okami just looks done. Kunchenko is starting to roll downhill on Okami and out striking him. Okami’s shot again has decent penetration but once he’s there, it just fizzles out. In round 3, Okami spent the entire third round flopping to his back. A complete and dominating performance by Kunchenko. Alexey got the easy decision win.

Ben Nguyen vs. Wilson Reis is next in a flyweight bout. In round 1, Reis tries to pick Nguyen up and slam him, very slick defense by Nguyen. Reis gets Nguyen down at the base of the fence, tries to take his back as he stands. Nguyen reverses Reis against the fence and they disengage. In round 2, Reis running Nguyen into the fence and working for the takedown or to take the back. Better success on the feet for Nguyen in this round. In round 3, Nguyen lands his short right hook twice in the opening seconds. Nguyen getting the better of the exchanges on the feet, and circling away from the fence. Reis got the decision win.

Keita Nakamura vs. Salim Touahri is next in a welterweight bout. In round 1, a lackluster round that had little action with both fighters looking for range when and if they throw strikes. In round 2, definitely the more active and aggressive fighter in that round. A close fight that saw both fighters have some moments. In round 3, Nakamura more aggressive to open the round. He forces Touahri to circle out and retreat. Nakamura got the split decision.

Kai Kara France vs. Elias Garcia in a flyweight bout opens the FOX Sports 1 preliminary bouts. In round 1, Kara-France takes Garcia’s back with a minute left. Has the hooks in, looking for the choke. Good defense on the ground by Garcia, but ultimately was just surviving there. In round 2, Garcia threatens with a triangle, then an armbar, but Kara-France escapes. Kara-France dropping a lot of shots, Garcia needs to move. In round 3, Garcia gets the takedown early but is reversed quickly. Kara-France drops Garcia with a right, follows him to the canvas. Garcia defends, grabs a leglock. Kara-France is all over it and ends up in back control. France got the decision.

Christos Giagos vs. Mizuto Hirota in a lightweight bout finishes off the UFC Fight Pass preliminary card. In round 1, Giagos catches Hirota with his hands down, tags him right on the chin. Giagos working ground and pound against the fence, tries for a guillotine as Hirota stands, but can’t secure it. Hirota tries for a heel hook with less than 30 seconds left, but Giagos escapes. In round 2, another effortless takedown early in the round and Giagos sets up shop in Hirota’s full guard once again. In round 3, Hirota gets a nice hip throw but Giagos reverses quickly. They end up back on the feet but Giagos shoots again within seconds and they’re back on the ground. Hirota has no answer for Giagos’ wrestling. Giagos got the decision win.

Opening the UFC Fight Pass prelims is Alex Gorgees vs. Damir Ismagulov in a lightweight bout. In round 1, Gorgees makes it back to his feet but Ismagulov is relentless, keeping him pressed to the fence and looking for the takedown. In round 2, All Ismagulov so far. He’s been the better man on the feet and has taken Gorgees down at will. In round 3, Ismagulov tries a Showtime kick that probably gave Anthony Pettis a phantom stomach cramp, wherever he is right now. Ismagulov brings Gorgees down with an effortless-looking body lock and sets up shop in half guard. Ismagulov got the decision win.