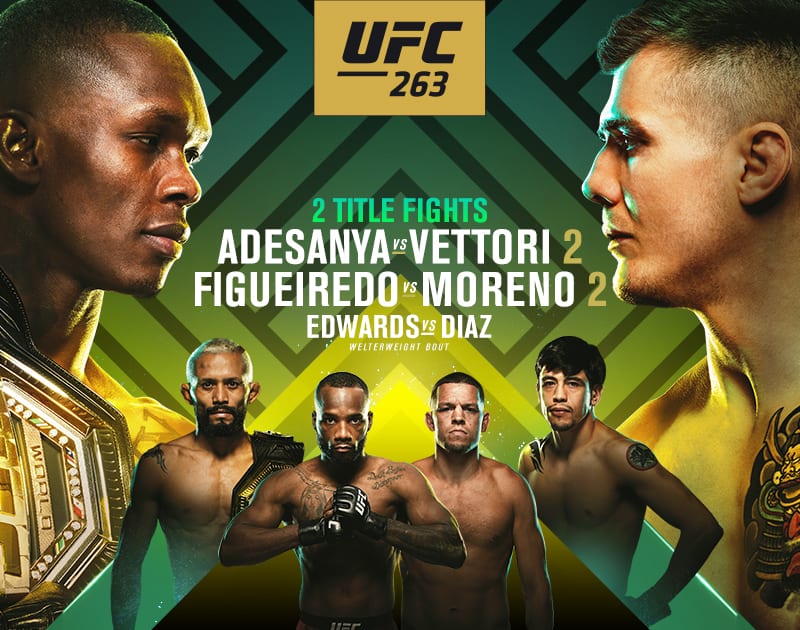 UFC 263 takes place this weekend at at the Gila River Arena in Glendale, Arizona. The lucky fans who’ve snapped up tickets for the latest UFC pay-per-view event will have the pleasure of watching three two massive title fights and the return of MMA icon, Nate Diaz.

In the main event Irsael Adesanya puts his middleweight title on the line in a highly anticipated rematch against Marvin Vettori. The pair previously fought in 2018 and on that occasion, ‘Stylebender’ emerged victorious via split decision.

Before that, Deiveson Figueiredo and Brandon Moreno will re-run their exciting, Fight of the Year candidate when they squared off at UFC 256 in December. The pair threw down for five rounds at the UFC Apex in Las Vegas before the judges scored the fight a majority draw and Figueiredo retained his 125lb strap.

Join LowKickMMA as we preview and predict these two title fights and some of the other epic UFC 263 fights. Hopefully, we’ll win some big money come Saturday night. Otherwise, we’ll head to the top casino online to try our luck.

Israel Adesanya shot for the stars last time out but failed to dethrone light-heavyweight champion, Jan Blachowicz earlier this year. After the first loss of his MMA career, we are expecting a vintage performance from ‘Stylebender’ against Vettori. The -250 favourite should be able to handily deal with the +200 in the first few rounds in our opinion. We expect Adesanya to pick his shots and pound out ‘The Italian Dream’ inside three rounds to retain the 185lb title. If you bet on Adesanya to finish his opponent, you’ll increase your odds to +188.

We are expecting much of the same as these two guys produced at UFC 256 late last year. Ultimately, we think Deiveson Figueiredo and Brandon Moreno will scrap it out for five full rounds. It’ll be another close fight be this time we expect Figueiredo to be named the winner. Figueiredo is the -225 favourite but don’t write off Moreno who is a sizeable +188 underdog despite his impressive performance last time out.

The people’s main event will see UFC fan favourite, Nate Diaz for the first time since falling short in his bid to become the inaugural BMF titlist. Top welterweight contender, Leon Edwards is the man who stands between Diaz and his return to the win column. We expect ‘Rocky’ to make a significant in this one. He’s a huge -550 favourite. The question is does he have what it takes to stop Diaz in this five-round non-title fight? Edwards will join a very elite list of fighters who’ve stopped Diaz. Your odds will dramatically improve should you bet on Edwards to do this +120. If you fancy Diaz to score the upsets he’s priced at +400.

An interesting fight between two ranked 170lb fighters takes place on the UFC 263 main card. BJJ wizard turned MMA title challenger, Demian Maia takes on streaking contender, Belal Muhammad. We are big fans of the Brazilian but cannot back him heading into this one. At 43-years-olds he’s almost certainly past his best and is rightfully the +188 underdog. Muhammad -225 favourite and the man we’ll be adding to our parlay this weekend.

Opening up the UFC main card we have a really exciting fight between light-heavyweight fighters Paul Craig and Jamahal Hill. The Scottish submission specialist is an underdog at odds of +250 despite being on a four-fight unbeaten streak.  That tells you that the undefeated Hill is one of the most exciting prospects in the 205lb division. Last time out he stopped Ovince St Preux in the biggest fight of his career. We are prediciting he’ll do the same thing again as a -330, although betting on the stoppage will improve your odds to -125