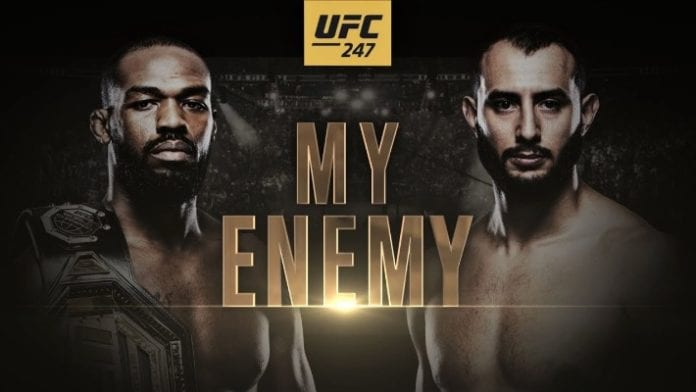 UFC 247 will go down tomorrow (Sat. February 8, 2020) from the Toyota Center in Houston, Texas. Mixed martial arts (MMA) fans will witness yet another defense of the light heavyweight championship by Jon Jones, who takes on undefeated challenger Dominick Reyes.

It will be the first UFC title bout of 2020. We here at LowKickMMA have compiled our UFC 247 staff predictions for the Jones vs. Reyes main event. Check them out below.

Dominick Reyes has all the tools to beat Jon Jones. He’ll be short in the reach department – as all Jones’ opponents are – but he matches Jones in height, brings knockout power to the table, and has a gas tank to go all five rounds. With that being said, Jones is overall the better mixed martial artist. He has superior striking, wrestling, and jiu-jitsu. Not to say Reyes doesn’t have the chance to land that one big punch, but I don’t see it happening. I got Jones winning this with a lopsided decision, or finishing the fight late. (Prediction: Jon Jones)

At the risk of looking silly, I’m going to go with Dominick Reyes. He has the size, length, and knockout power to challenge Jones, and the way everyone is overlooking him so easily, along with the last two performances of Jones, I think we could be in store for a huge upset. (Prediction: Dominick Reyes)

As with every Jon Jones fight, I’m favoring the light heavyweight king to pick up the win. Dominick Reyes has an undefeated record and knockout power. However, nothing I’ve seen from him suggests he’s the man to beat Jones. I expect the champion to dictate the fight from the first bell and take it wherever he wants to. Most likely Jones will take home a decision win. However, I wouldn’t be surprised to see him get the finish late on. (Prediction: Jon Jones)

Dominick Reyes carries the dangerous confidence of an undefeated fighter going into his title bout with Jon Jones. Despite his winning streak, powerful left hand, and athleticism, it’ll be tough to top Jones while he remains active and in his prime. Expect Jones to utilize his length and distance control and force Reyes into traps. Reyes’ inexperience and eagerness will work against him as Jones stops him prior to championship rounds. (Prediction: Jon Jones)

What do you think about our UFC 247 staff predictions? Who are you picking in Jones vs. Reyes?