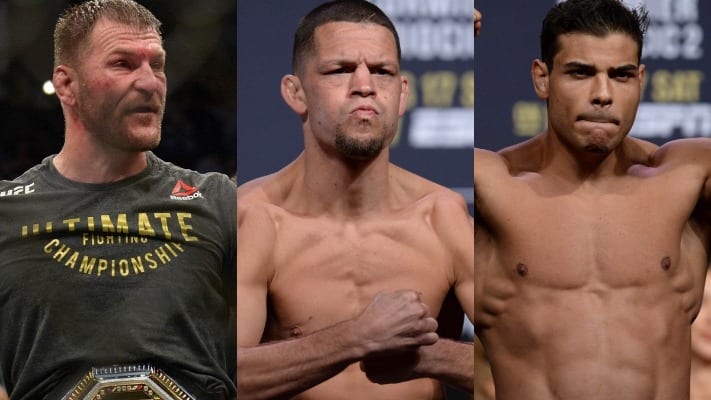 This was one of the most stacked cards of the year, and it certainly delivered. The first six fights went to decisions, then there were three knockouts and three decisions in the last six fights of the night.

The event featured a heavyweight rematch between two of the best to ever do it in Daniel Cormier and Stipe Miocic, a battle that saw Miocic regain his UFC heavyweight championship. It was a surprise to most, perhaps setting the stage for a trilogy. Nate Diaz and Paulo Costa also had great performances last night, amongst others. We at LowKickMMA have compiled a list of five fights to make after their showings.

Sodiq Yusuff improved his record to 10-1 with six knockouts last night, as he KO’d Gabriel Benitez toward the end of round one. A fight that would make sense for him, now that he’s 3-0 in the UFC, is a matchup with “The Menace”. Michael Johnson came to the UFC off of “The Ultimate Fighter 12,” becoming a finalist in his season after going 4-0 on the show. Much like Yusuff, who came to the UFC after going 1-0 on the Contender Series.

Barboza isn’t a top-five guy anymore, but at this time, and for quite a while afterward, he was a top-six guy for a few years straight. Those two unanimous decisions, he won 30-27 in both. That’s three wins over some of lightweight’s best. He’s an incredibly skilled fighter. Johnson started out wrestling, and his hands are nothing to underestimate, as the current interim UFC lightweight champion in Poirier can attest to.

Both guys possess power, though the advantage would go to Yusuff. Both are pretty technical, but the edge would probably go to Johnson considering his experience and the tricks he has. Yusuff is a brutally powerful featherweight, as we saw last night. Johnson throws from all sorts of angles and is a bit more precise. It’d be a good test to see whether or not Johnson should stick around in the UFC, or if Yusuff is ready for bigger names.

When looking at the middleweight rankings, this is really the only matchup for Romero that makes sense. Their first fight was great and about as close as they get. Romero won a razor-thin split decision that could’ve literally been a draw the first time they met in late 2015.

Both of these guys are ground fighting specialists that have acquired some serious striking skills. Souza generally throws punches, but is so technical and powerful with it, his boxing is quite fun to watch. Romero throws everything from oblique kicks to overhands, to snap kicks, to flying knees, to spinning back fists, to regular back fists.

Though “Soldier of God” doesn’t always throw often, when he does, it counts. One thing that’s very respectable about Souza, he’s one of the best BJJ guys on the entire planet, and he learned how to wrestle. Much like Demian Maia, he learned how to take his opponents down effectively, which is something not many BJJ fighters, even BJJ elites, do.

With Romero’s 2000 Olympic silver medal in freestyle wrestling and Souza’s ten gold medals in BJJ world championships, not to mention all of his silver medals, this fight would be a great one to run back. They tried to make it happen again this April, however, Souza fought Jack Hermansson after Romero had to pull out.

Both men are the elite of the elite in their respective disciplines. This is a rematch that would certainly be worth making again.

Paulo Costa had a really great performance last night, as he defeated the No. 2 middleweight in the world. He simply has an unbreakable will and some immense power. So much so that it’s crazy that Romero didn’t go down, or Costa for that matter.

A matchup between Costa and Gastelum would be a great matchup for a couple of reasons. First, it would probably be a No. 1 contender fight, and both are such viciously powerful punchers. With Gastelum sitting at No. 3 in the rankings, and Costa just beating the No. 2 middleweight in the world, this fight makes all the sense in the world.

Both are products of “The Ultimate Fighter,” Kelvin went 4-0 on his season and won, while Costa went 1-1. That loss was via a very close split decision, however, and it’s the only time he’s ever lost. With the show each of these guys gave us in their last fights (Gastelum with Adesanya and Costa with Romero), wouldn’t this one be fireworks too?

There was some talk of Nick Diaz coming back to fight Jorge Masvidal earlier this year, but we found out it was all fabricated. While that was heartbreaking, we got the other Diaz back at least, as Nate just defeated Anthony Pettis via unanimous decision. He had a great showing last night, as he just wouldn’t let Pettis off the hook and kept on him.

Both Diaz and Masvidal are primarily strikers, though both can fight on the ground very well. Diaz holds a 2nd-degree black belt in BJJ, and while Masvidal only has two submission wins in 34 total, he can grapple very well. He’s also very good at mixing up his takedowns with strikes when he wants to. With the amount of attention Masvidal’s gotten lately, and the return of Nate Diaz coming off a win, this is the only fight to make in the UFC’s welterweight division. This one and Usman versus Covington.

It doesn’t make sense to make Masvidal versus Edwards now. It would have been cool to see Masvidal fight the winner of Diaz versus Pettis, regardless of who came out on top. It’s almost certain the UFC is going to do everything possible to put this together.

When asked a couple of weeks ago about what’s next, Masvidal said he’d fight no one other than, “Conor McGregor or fight for the welterweight title””. When asked just a couple of days ago, he said he’d, “sign a Nate Diaz bout agreement in a heartbeat”. That’s great to hear, especially considering Diaz called him out after beating Pettis. Two of the toughest and grittiest dogs in the sport, two real fighters. Let’s see it.

It’s hard to say who’s better all-time in all honesty. Cormier was the man at UFC 226, and Miocic was the man last night at UFC 241. This fight should certainly happen again. Just like Cain Velasquez had his three fights with Junior dos Santos when they were the No. 1 and No. 2 guys, we need to see this tiebreaker.

Though Miocic defended the UFC heavyweight championship more than anyone ever, and just won it again (5-1 in UFC title bouts), “DC” was 15-0 at heavyweight going into this fight. There’s a very strong case for either, which is why this needs to happen just one more time.

Miocic was doing great in the first couple minutes of their first fight, then, Cormier clinched up and landed a beautiful knockout blow. This second fight was much different. “DC” most likely won the first two rounds, the third was close, and the fourth is where it really went downhill for the former UFC heavyweight and light heavyweight champion.

In that fourth round, Miocic landed so many shovel hooks to Cormier’s liver. He didn’t even set them up with anything, he just pivoted on his foot and sunk them into Cormier’s gut, and it worked out. After landing the last one, he then caught “DC” in the face with a punch, and his body language said it all. Then, as Miocic swarmed him, an exhausted “DC” fell, and Miocic recaptured his throne.

Congratulations to Miocic and Cormier both on one hell of a fight. They went after it for 19 straight minutes, two absolute warriors. “DC” said he needs to talk with his wife about what he should do next. He has two trilogies he can finish if he so chooses, and potentially go out defeating the only two men to ever defeat him, like Georges St-Pierre did.