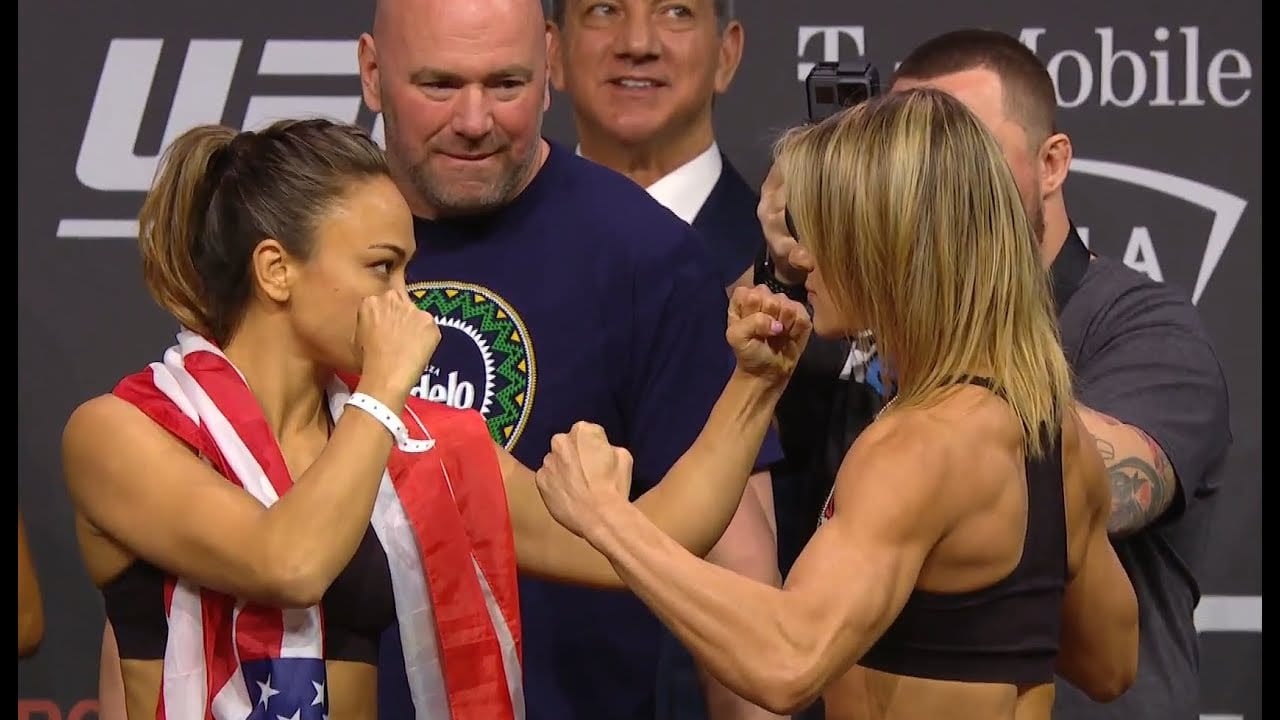 The wait is over. UFC 229 Is here. Before Conor McGregor and Khabib Nurmagomedov collide in the biggest fight in MMA history two top strawweights settle their score.

Michelle Waterson “The Karate Hottie” and Felice “The Lil Bulldog” will kick off the biggest Pay-Per-View main card in company history when they make the walk at the T-Mobile Arena on Saturday (Oct. 6 2018) night.

The No.8 ranked Waterson is coming off a hard-fought victory over Cortney Casey from back in April. She has won two of her last four fights and a win over Herrig would cement her position in the top ten.

Herrig, 34, is coming off a close split decision loss to Karolina Kowalkiewicz back at UFC 223. Just prior to that “The Lil Bulldog” had won four straight with notable wins over Alexa Grasso and the aforementioned Casey.

Herrig takes control of the Octagon landing some nice punches. Waterson lands a front leg side kick that backs Herrig up. Midway through the first round and both women exchange some flurries. Herrig has a kick-heavy attack so far. Waterson fighting defensivly, looking to counter here in the opening round. Herrig clinches Waterson against the cage and lands some sneaky punches. The last 90 seconds of the round was spent in the clinch with Herrig doing minimal damage. Herrig should win this round.

They meet head on to start round two and Herrig lands a nice one-two. Almost immediately Herrig clinches Waterson against the cage again. Waterson manages to land a defensive knee but nothing significant. After two minutes on the fence, Waterson spins out and lands an elbow. Waterson then lands a trip and ends up in top control. Crazy turn of events. Herrig holds on to Waterson as to minimize the amount of damage she can do. The last two minutes of the round was spent with Waterson in top control landing pitter pat shots. Waterson should’ve done enough to win this round.

The last round starts with Waterson throwing a front kick. Herrig evades the kick and clinches Waterson. Waterson quickly defends and spins out. Herrig lands a judo throw and ends up in Waterson’s guard. Waterson is landing some hard elbows from the bottom. Herrig is on top but Waterson is landing the more significant strikes. Waterson goes for an omaplata, Herrig defends. The referee stands them up. Again, Herrig clinches a body lock and muscles Waterson to the cage. The women break and the last 90 seconds is still anyone’s fight. The women engage in some striking to end the round. Close round. Maybe Herrig?