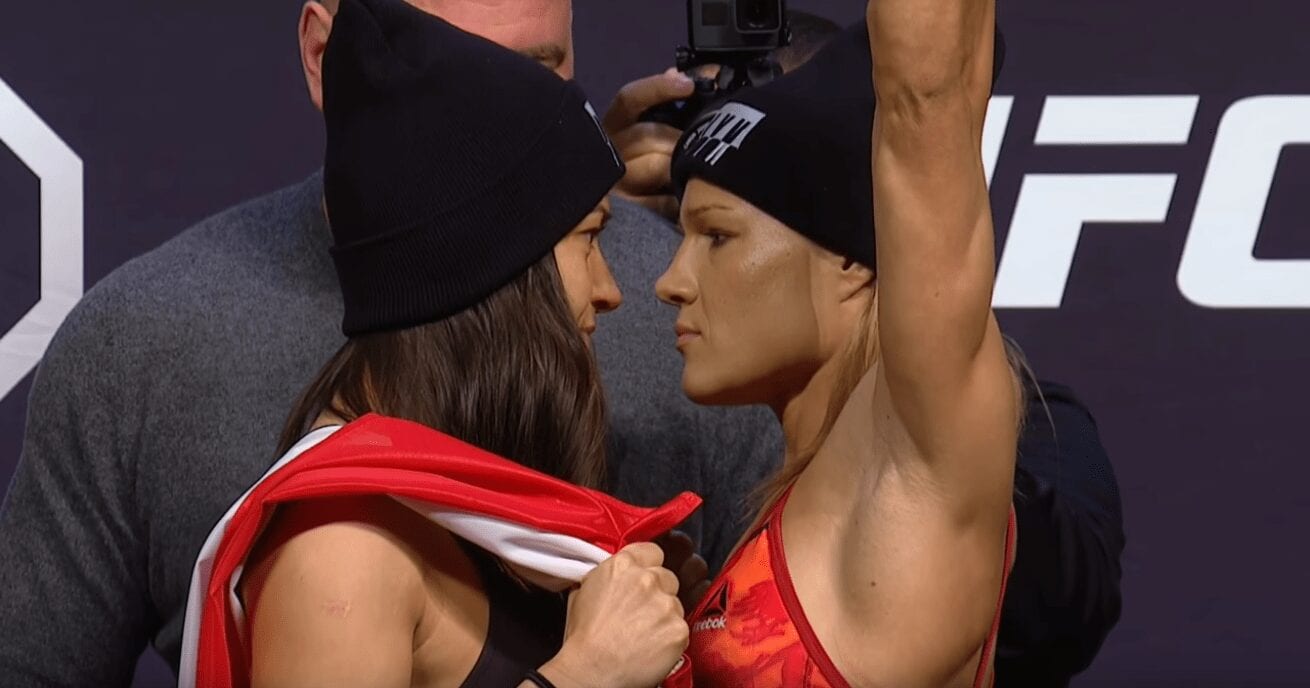 It’s once again fight day here at LowKickMMA, and the talent on display tonight (Saturday, April 7, 2018, 2018) will come from in the form of UFC 223. Headlining the card are Al Iaquinta and Khabib Nurmagomedov, but there’s a whole bunch of great fights also taking place on the preliminary section of the card.

Karolina Kowalkiewicz vs. Felice Herrig in a women’s strawweight bout closes the preliminary card on FOX Sports 1. In round 1, Herrig doesn’t like the knees. She’s got a body lock and tries to drag Karolina down but can’t finish it. KK is looking to get inside boxing range and land knees and elbows. Herrig pushes Karolina into the cage again. They break and KK rolls for a leg lock? She wraps up a triangle and rolls into mount! Herrig escapes but KK works from guard to end the round. In round 2, KK lands a couple of leg kicks. Her output is starting to increase here, seems like she’s getting the timing and avoiding the counters from Herrig better. KK is also having her way offensively in the clinch, landing damaging knees. Herrig looks for the body lock and a trip but no dice so far. Herrig lands a nice right again but KK does work in the clinch once more right after, knees and elbows. Then a head kick is just blocked by Herrig. Spinning backfist lands. They tie up and KK does work with elbows over the top. Herrig sends a few back but she’s losing badly in this phase. KK looking for a takedown. They block each other’s takedown attempts and separate. KK steps in with a right, ties up, and goes back to bashing Herrig inside. Herrig blocks a throw. In round 3, KK looks fresher and more confident. She hits a right, steps in for knees, lands a right to the body. Volume/cardio/footwork. Herrig lands a pair of jabs then a strong right. A Herrig left rocks KK! But Herrig ties her up and pushes her into the cage. KK separates with 10s left and they BANG to the bell. Hands and knees fly fast to the bell. Kowalkiewicz got the decision win.

Evan Dunham vs. Olivier Aubin-Mercier in a lightweight bout. In round 1, Todd Anderson our ref here. Dunham putting the pressure on right away and he lands a nice 3-2 that stumbles OAM. OAM comes back with a cross to the body. OAM folds up Dunham with a pair of knees to the body! Dunham goes down to the base of the cage and OAM pounds him out.

Ashlee Evans-Smith vs. Bec Rawlings is next in a women’s flyweight bout. In round 1, Big leg kick for AES to start. Rawlings stuffs a takedown and they trade punches but neither lands flush. More kicks from Evans-Smith. Rawlings leg kicks but AES comes in w/ a cross. Evans-Smith pushes forward with a bevy of right hands. She kicks, ties up, and hits several uppercuts. Evans-Smith is walking right through Rawlings’ range and landing offense in close quarters. She bounces a wheel kick off Rawlings’ guard but eats a cross. Rawlings hits another cross. AES pushes her into the cage and dirty boxes again. Bec with a right but that and the occasional leg kick is her only offense. AES hits a takedown right before the bell. In round 2, Another slow wheel kick connects for AES. Rawlings hits a 1-2 then a hard cross. Evans-Smith gets right back in her face with knees, dirty boxing and 1-2s in close. Big lead uppercut connects flush for Evans-Smith. Spinning back-fist lands for her too. Rawlings stuffs a shot and makes her pay with a knee.In round 3, Rawlings has a leg kick checked but lands another counter right. AES with a head kick. Rear uppercut lands for AES. Neither woman is landing as much this rd as the pace has slowed. They trade leg kicks. Rawlings walks into the hardest 1-2 of the fight. Rawlings finally starts cutting angles when AES comes forward, but she’s only capitalizing with counters occasionally. Smith picked up the win.

Zabit Magomedsharipov vs. Kyle Bochniak in a featherweight bout opens the FOX Sports 1 preliminary bouts. In round 1, Clark presses forward behind a power 1-2-1, largely misses but uses it to tie up. He hits a trip takedown but Rodriguez wall-walks up. Clark keeping Rodriguez pressed into the cage and dirty boxing a bit but the ref restarts them. Rodriguez hits a leg kick that drops Clark quick. Clark pops up but now he’s pressed into the cage. Rodriguez steps back and lands some power shots but Clark grabs him and stuffs him back into the cage. Clark dirty boxing and kneeing again, hits a nice elbow. Clark goes for a high crotch but gets stuffed. Rodriguez gets separation and goes for a flying knee as Clark’s back is to the fence. Clark blocks/eats it, grabs him and drags Rodriguez down.In round 2, Clark steps in with a jab. Rodriguez hits front and body kicks before Clark ties up and pushes him into the fence once more. Rodriguez turns Clark around, lands an elbow, and backs off. Clark misses on a spinning attack. Rodriguez is landing hard whenever Clark backs himself to the cage. But Rodriguez isn’t keeping distance, letting Clark grab him and put him on the fence once more. Rodriguez definitely doing more damage. Clark controlling and kneeing. He lets go to hit an elbow then drops level for a double leg but Rodriguez stuffs it and separates.In round 3, Clark trips Rodriguez down and has a wrestling ride, landing right hands. Rodriguez gets up, dragged down again, works to his feet once more. Clark pulls Rodriguez off the cage and puts him on the mat. He’s in full guard but not getting much offense off. Rodriguez scoots back to the cage. Rodriguez stands with 90s left and lands a pair of nice knees to the body but his back is still on the cage. Clark won the fight by decision.