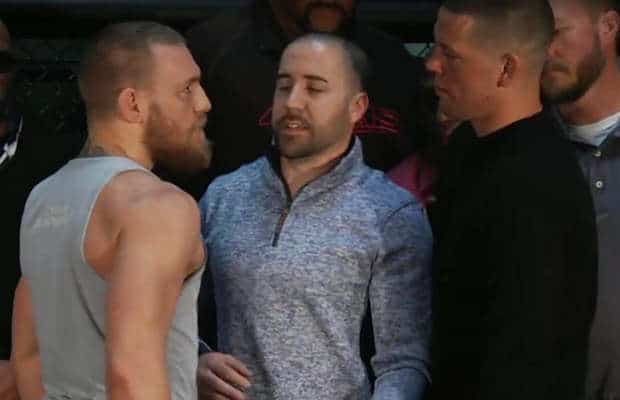 We are now just 15 days away from what will likely serve as the biggest MMA event of the year, and could possibly serve as one of the biggest of all-time. UFC 202 is slated for Saturday August 20, 2016 from the T-Mobile Arena in Las Vegas, Nevada. The blockbuster card will be headlined by the highly-anticipated rematch between fan favorite Nate Diaz and reigning 145-pound kingpin the “Notorious” Conor McGregor.

The backstory behind this rivalry has become a well-known tale throughout the media. After defeating former longtime featherweight champion Jose Aldo in just 13 seconds last December, McGregor made it clear that he was going to attempt to make history. The Irishman signed on to face then lightweight champion Rafael dos Anjos at March 5’s UFC 196 in hopes of becoming the first man in promotional history to hold two titles at the same time.

Diaz, on the other hand, was coming off of a dominant unanimous decision victory over Michael Johnson after spending over a year on the sidelines. After his victory, the Stockton Bad Boy called out McGregor in an epic post-fight speech, landing him as the leading choice when dos Anjos pulled out of the bout with the “Notorious” one on less than two week’s notice.

Diaz stepped in and he and McGregor constantly went back and forth despite the short build up. When fight night came and the cage door closed, the two men didn’t hold back. At the end of the first round, each man was battered and bloodied, but Diaz appeared to have more gas in the tank. Towards the tail end of the second frame, Diaz rocked McGregor before the fight wound up on the canvas where Diaz’s world class jiu-jitsu skills sealed the deal.

Relive the madness below as UFC 202 approaches: