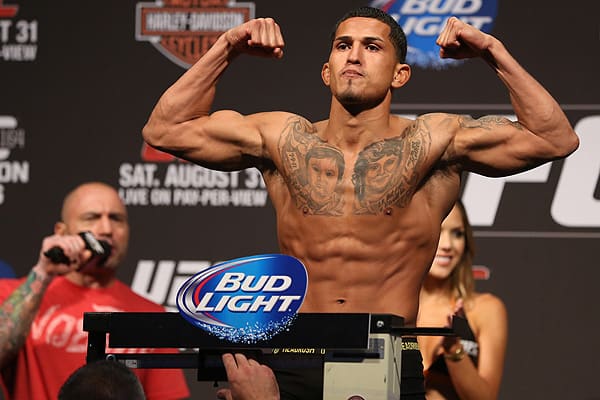 Join us live on December 5th at 7PM ET for the live streaming UFC 181 weigh-ins video & results here at LowKickMMA.com

UFC 181 goes down tomorrow (Sat. December 6th, 2014) with two huge title fights headlining the evening. In the co-main event we have the returning lightweight champion Anthony Pettis, as he looks to make his first defense against former Strikeforce boss Gilbert Melendez. Will it be grit or skill that wins the night at 155?

Also looking to make his first successful defense will be Johny Hendricks, as he hopes to retain his welterweight strap against old school legend Robbie Lawler. “Ruthless” and “Bigg Rigg” threw down once before, at UFC 171, and the result was an instant classic. Keep an eye on this main event clash, as it will likely be another huge burner.

Heavyweights Brendan Schaub and Travis Browne look to keep relevant in the jammed up division, as they also collide on the PPV section of the UFC 181 card. Look out for the return of Todd Duffee too, as he takes on Anthony Hamilton in another clash at 265 pounds. A potentially thrilling lightweight clash between Abel Trujillo and Tony Ferguson rounds off the main card.

The main talking points from the prelims include Urijah Faber, as he takes on Francisco Rivera in the feature bout, Sergio Pettis as he takes on Matt Hober, and Raquel Pennington vs Ashlee Evans-Smith.