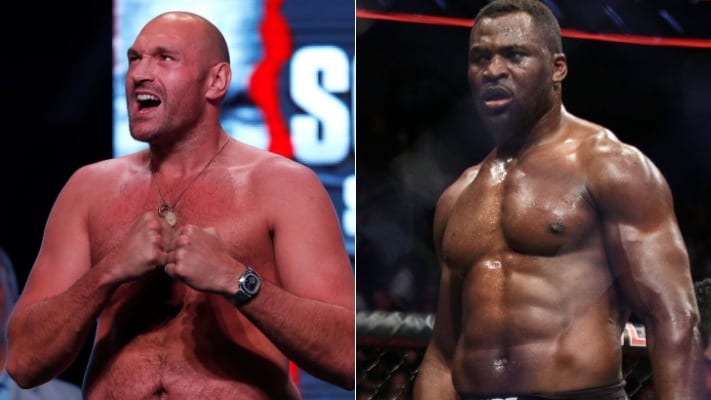 Tyson Fury remains adamant that he will square off against Francis Ngannou inside the Octagon and says he’s happy to wear 4oz gloves but will not partake in a traditional MMA bout.

‘The Gypsy King’ is currently preparing for a trilogy fight against Deontay Wilder. The heavyweight duo will square off for a third time on July 24 after an arbitrator ruled Fury owes ‘The Bronze Bomber’ a rematch.

That ruling scuppered plans for an all-English heavyweight undisputed fight with Anthony Joshua. ‘AJ’ currently holds three of the four major world titles and is expected to face the winner of Fury-Wilder III provided he gets by his WBO mandatory challenger, Oleksandr Usyk, in September.

Fury has frequently linked up with MMA fighters for training. Most recently, he was in the gym with Nick Diaz, who is expected to return to the sport later this year.

In an interview with TMZ Sports, Fury revealed that Diaz gave him some information about the current UFC heavyweight champion, Francis Ngannou.

“Nick looks good,” Fury told TMZ Sports. “Nick is training hard and he is making his comeback. He did tell me that Ngannou can’t do any wrestling anyway, so we are just looking for a stand-up bang out.

Fury wants his future fight with Ngannou to take place with modified rules.

“Me and Ngannou in the small gloves, let’s make it happen, Fury added: “As soon as I am done with Wilder and Joshua, I will fight Ngannou in an octagon, in the four ounce gloves and just punching.” (Transcribed by TalkSPORT)

Ngannou’s UFC career is currently in limbo. The Cameroonian knockout artist picked up the heavyweight strap in March but is already facing the prospect of an interim champion. Ciryl Gane and Derrick Lewis are set to scrap for the secondary belt in August despite the fact Ngannou will be ready to return to the Octagon one month later.

Do you want to see Tyson Fury fight Francis Ngannou inside the Octagon?