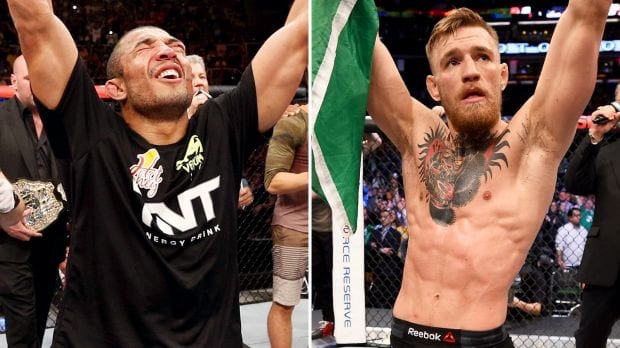 The UFC 189 main event on July 11th was in serious trouble when hews emerged about Jose Aldo injuring his rib in training. Rumours started to circulate that it was Junior’s training partner, there to mimic Conor McGregor, that had caused the injury, although it was later dispelled. Along with the mishap with the NSAC (Nevada State Athletic Commission) random drug test, this has been a bizarre fight camp for the champion.

Every fighter with a Twitter account was calling to take Aldo’s spot at UFC 189 against Conor McGregor, but our worries and their chances were put to rest late last night. The news came as a massive relief to both fans and the UFC’s budget, as the promotion has spent a lot of time and money on pushing the featherweight headliner in Las Vegas, Nevada. The doubleheader of title fights, also featuring Robbie Lawer vs. Rory MacDonald, is saved from certain death with the revelation that ‘Scarface’ is good to go.

Twitter went in to meltdown after the positive news, including Conor McGregor, Dana White and a host of other well known faces in the sport, check it out and stay tuned to LowKickMMA!

It turned out he just had a little period pain.

If @NateDiaz209 and @TheNotoriousMMA is actually a possibility I hope Aldo does pull out. http://t.co/2DqOtoFj9E #UFC189

RT if this was you getting the #UFC189 news http://t.co/LvxxOXl1TP

Been busy, finally have a chance to say HELL YEAH about @josealdojunior staying in the fight w @TheNotoriousMMA! Can. Not. Wait!! #UFC189