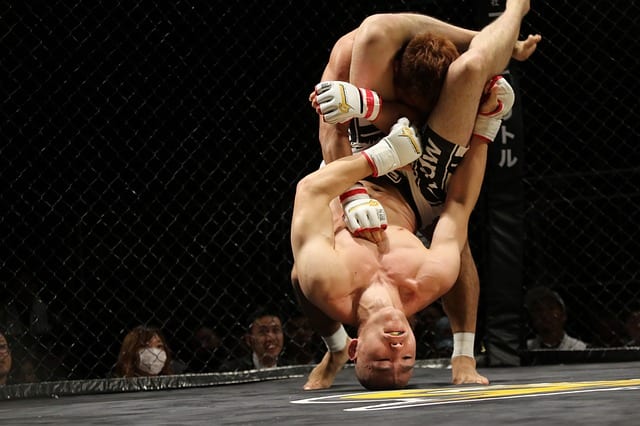 When you first begin your training in Jiu Jitsu, there are a group of basic submissions you always learn first. One of the most efficient and diverse submissions of the group is the triangle choke.

The triangle choke out of all of the basic submissions may be the best out of the bunch. This is because there are so many different ways to hit a triangle choke, which makes it difficult to defend. Many high level Jiu Jitsu athletes have based their entire games around getting a triangle choke for this reason.

Whether you’re a Jiu Jitsu beginner or a seasoned grappler, you can learn something from this article.

When was the triangle choke invented?

Like many of the techniques in BJJ, the triangle choke originated within Judo. The name for a triangle choke in Judo is “sankaku-jime” that roughly translates to figure 4 choke.

When early Jiu Jitsu practitioners were developing the martial art, they acknowledged the effectiveness of this technique. So naturally like many of the moves they adopted it, they innovated and perfected it and teach it across jiu jitsu schools.

How does the triangle choke work?

While many know how to perform a triangle fewer know the actual mechanics of how the submission works. The science behind the functionality of the choke is very cool and interesting.

The first thing you need to know is that the triangle choke is what you call a “blood choke.” Meaning that it puts pressure on the carotid arteries of your neck blocking blood flow to the brain.

How it works is you need your legs wrapped out your opponent’s neck with one arm stuck between them. Your top leg puts pressure on one side of their neck, while you push their own arm into the other. Subsequently using their own arm to strangle them.

The shape you have your legs around the opponent’s neck looks exactly like a triangle. Which is why it was given the name triangle choke.

The basic triangle choke from guard is pretty straightforward. First you have to control their arms. Grab an overhook on one arm and either have wrist control on the other or cup around their bicep.

For the next step, you have to do a small hip escape and get on your side. You’ll never land a triangle choke laying flat on your back.

With you controlling one of their arms with an overhook, you have to bypass their other arm. Push it away as you bring your leg in while lifting your hips and placing your leg on their neck. Be sure to place it down with force to break their posture or you’ll be less likely to get it.

Then grab your ankle to keep their head down and angle slightly to the side to get maximum pressure.

Now for the last few steps. Lock it up by placing your knee over your ankle, squeeze your knees together to apply pressure. If they’re tough, you can apply extra pressure by pulling their head down or hooking their leg or arm.

Spider guard offers a lot of different entries into the triangle choke. Here are the details for an easy setup from spider guard.

You have a normal spider guard with sleeve grips and your feet on the opponent’s biceps. Choose a side to shoot your leg past their arm by pulling the sleeve and doing a push kick motion.

Now take that leg and place it down with force on their back to break their posture. With them in place for the triangle shoot your other leg on top of their neck with force. Then cut an angle and lock it up.

Lasso guard also has quite a few great techniques for landing a triangle choke. Here is one basic one for you to try.

Grab your lasso grip by holding the opponent’s sleeve and loop your foot inside their arm behind their tricep. You’ll be controlling their other arm with a classic spider guard grip on their bicep.

Kick the spider guard grip off their arm and place it with force on their neck. Then all you need to do is kick through on your lasso guard grip and take the triangle.

Here is a good option to get a triangle if you like using the De La Riva Guard. Take your

De La Riva hook behind the opponent’s leg with a near collar grip. You’ll be controlling their other arm with a classic spider guard control.

Break their posture with the collar grip, while holding them in place with your DLR and spider grips.

Kick your foot off their bicep and place it down on their neck. At the same time you break their posture down with the collar grip.

For the finish take your De La Riva hook off the opponent’s leg and lock up your triangle.

If an opponent starts to get savvy to your scissor sweep and keeps blocking it, you have a triangle available.

When they sit their weight down to defend the sweep, they leave themselves open for a triangle. Take your knee shield off their chest and use it to pin the opponent’s arm to their body.

Then just simply rotate your leg and place it down on their neck and lock up the choke.

Scissor sweep isn’t the only sweep you can get a triangle off of. You can also get one off a defended hip bump sweep.

Either you tried the hip bump and failed or feel their base is too good to land the sweep. Hook the opponent’s head and lift your hips up like you’re going for the sweep.

But this is just a fake, when in reality you’re going to climb up the opponent’s back. Just pass their arms, pull their head down, and lock in your triangle.

While it isn’t usually the go to submission from mount. There are a couple different options available for a triangle from mount.

If the opponent hooks under your leg you can easily land a triangle. But if you want to set it up. There’s a few more steps.

When the opponent is protecting their neck take wrist control on both arms. Pull one down as you pull their neck up and loop your leg under.

For the finish it is up to you if you want to lock it in from mount or roll to your back and finish the sub.

Tips for doing the triangle choke

While the triangle choke is pretty simple, there are still small details you need to remember. Forgetting one of these details could result in you losing the choke.