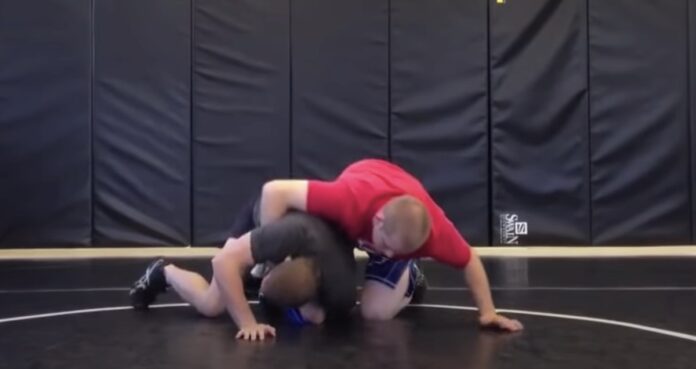 The Granby roll is one of the basic movements that you have to know in Jiu Jitsu. BJJ players adopted this move from wrestling and have innovated it into various techniques.

Who invented the Granby roll?

The Granby roll has been used in wrestling for hundreds of years to escape the back body lock.

Martin is considered one of the greatest US high school wrestling coaches that had ever lived. Having won over twenty state wrestling champions and coached numerous state champions.

He developed the Granby shoulder roll at Granby High School in Norfolk, Virginia, which is how the move got its name. A Granby roll is an offensive move from defensive positions.

Usually from a ride position on all fours or when an opponent has a wrestler’s back from stand.

Successfully doing the Granby roll to escape from the ride position is worth five points in folkstyle wrestling. Two points for the escape and three points for the near fall from the opponent’s back hitting the mat.

The Granby roll was so effective that Martin taught it to numerous Olympian and champion collegiate wrestlers during his time. Wrestlers brought this move over to both MMA and BJJ, where it has also been shown to be effective.

It has become a must know technique in all three combat sports that all beginners learn in their first classes. Today, the Granby roll is still being innovated in all combat sports.

How does the Granby Roll work?

A Granby roll is a horizontal shoulder roll that is used in all combat sports with grappling. In folkstyle wrestling it is used to get out of ride positions and back control from standing.

It works by shoulder rolling into your opponent as your legs invert. This momentum helps get your body over and out of the bad position.

Giving you the opportunity to set up a takedown, go to guard, or even land in side-control. This wrestling technique has translated well into MMA and BJJ, where it’s used to recover guard.

How to do a Granby roll

Before you can do any technique involving a Granby shoulder roll, you have to learn the movement. Every beginner first learns this roll along with the front and back shoulder roll.

You first learn the Granby roll from a sitting position with your heels on the mat. Choose which side you want to roll on and tuck your arm either behind your back or under your leg.

Now to start your roll, lean towards the shoulder you want to roll on, while lifting your back foot up. Your back foot arches up and over to get your roll started, while you base on your lead foot.

Grip the mat with your lead toes to help you roll straight. Also be sure to roll over your shoulder and not your neck.

When you put all of these steps together you’ll Granby roll back to your starting position with ease.

Granby roll out of turtle

The original Granby roll was a way to escape out of the ride position in wrestling. In BJJ and MMA, this position is called the turtle position.

Start the roll by tucking your shoulder and roll into your opponent. Your legs are going to arch up and over to help you turn your body over onto your knees.

You could also roll to your back if you are more of a guard player. Either way, you’re out of danger and ready to set up your own attack.

Here is another instructional of this technique from a Jiu Jitsu perspective, where you recover guard.

The Granby roll was also developed to escape a back body lock from standing. This is a counter that you’ll have to do fast before your opponent lands their takedown.

Grab hold of your opponent’s arm with your back hand and tuck your front arm behind your back. Then in one quick movement, you’re going to go right into your Granby roll.

When done perfectly, you will not only takedown your opponent, but also land in pseudo-side-control. Earning 2 points in BJJ and of course 5 points in folkstyle wrestling.

In BJJ, the Granby roll has been innovated as a way to recover your guard from an opponent’s pass attempt. This is done when you can’t make space between you and your partner to do an elbow escape to try and recover.

Doing this gives you just enough space between you and your opponent to bounce back and recover guard.

Tips for doing a Granby Roll