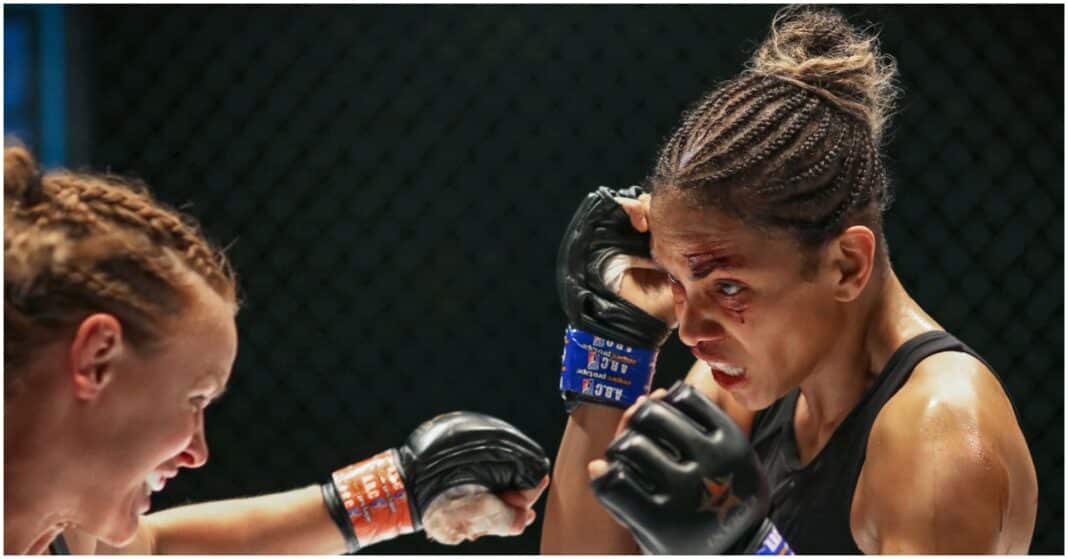 The trailer for the upcoming release of a new mixed martial arts picture, Bruised directed by and featuring renowned actor, Halle Berry as well as current undisputed UFC flyweight champion, Valentina Shevchenko has been released ahead of its November 24. Thanksgiving release on Netflix.

The feature, which is slated to release on Netflix on November 24. and in select theaters for screening on November 17. is directed by the aforenoted, and written by Michelle Rosenfarb.

Per a press release the brief synopsis of the movie’s plot is as follows;

“Jackie Justice (Halle Berry) is a mixed martial arts fighter who leaves the sport in disgrace. Down on her luc and simmering with rage and regret years after her fight, she’s coaxed into a brutal underground fight by her manager and boyfriend, Desi (Adan Canto), and grabs the attention of a fight league promoter (Shamier Anderson) who promises Jackie a life back in the Octagon. But the road to redemption becomes unexpectedly personal when Manny (Danny Boyd Jr.) — the son she gave up as an infant — shows up on her doorstep. BRUISED marks the directorial debut of Academy Award winner Hallie Berry and also stars Adriane Lenox, Sheila Atim, Valentina Shevchenko, and Stephen McKinley Henderson in a triumphant story of a fighter who reclaims her power, in and out of the ring, when everyone has counted her out.“

This evening, the streaming platform officially released a two-minute teaser trailer of the film on their official Twitter account.

“Halle Berry makes her directorial debut and stars in Bruised as Jackie Justice, a disgraced MMA fighter who is offered a chance at redemption — both in the cage and in life. Premieres November 24.“

Kyrgyzstan native, Shevchenko, the UFC’s current flyweight champion, is slated to play the character of Lady Killer in the upcoming film, playing the lead rival of Berry’s character, Justice throughout her professional career.

22-3 as a professional mixed martial artist, Shevchenko has won all eight of her flyweight outings under the UFC’s banner, most recently stopping Lauren Murphy with fourth round ground strikes at UFC 266 last month, successfully defending her flyweight title for the sixth time consecutive time.