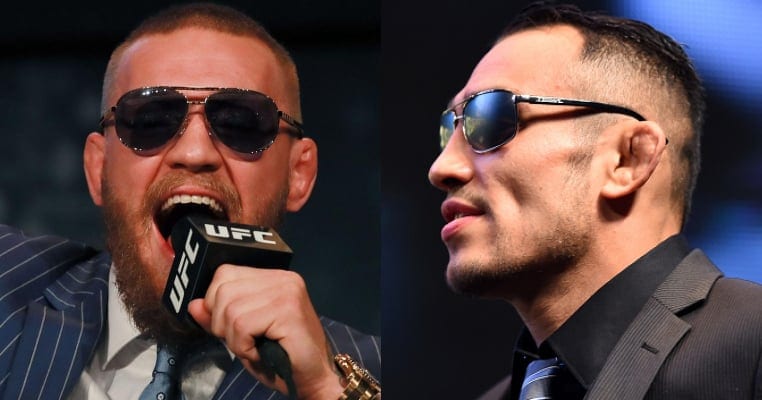 Tony Ferguson revealed he had asked for a fight with Conor McGregor – only to be turned down by the management group that both fighters shared at the time.

Ferguson returns to action this Saturday (June 8, 2019) at UFC 238 in Chicago, Illinois, when he faces Donald “Cowboy” Cerrone in a pivotal lightweight clash. However, he was previously targeting a fight with McGregor. It never came to fruition, and with both fighters being represented by Paradigm Sports Management, Ferguson eventually parted ways with them in April.

Now with Ballengee Group, Ferguson spoke more of what increasingly became a conflict of interest with his old management:

“When I asked them, I said straight up, ‘I want Conor next,’ they basically told me no,” Ferguson said in a recent interview with ESPN. “They’re defending him the same way Dana is defending him. Any person that’s got their hands in Conor’s pockets, they’re kissing their a**.

Ferguson was notably at Paradigm before McGregor, and was initially expecting the Irishman to remain at featherweight.

“I was pretty damn sure he was going to stay at 145,” Ferguson added. “Apparently, he runs the show over there at Paradigm. I’m not going to talk bad about Paradigm. …But I have some people that are really looking after me now, there are a bunch of them.”

“”El Cucuy” was not done talking about UFC president Dana White either. While another win for Ferguson should guarantee him getting the next crack at the title, White recently claimed he could see a rematch between Khabib Nurmagomedov and McGregor happening. Here’s what Ferguson thought of that statement:

“That’s because he’s a fathead too,” Ferguson responded. “I’m going to tell you straight up, he’s a fathead too. I’m not talking down on Dana but Dana’s pissed on me more than once or twice man. He said anybody that wore glasses inside should have that sh*t done to them.

“Remember when I tripped? I wasn’t wearing sunglasses. I was wearing prescription glasses. I’m going to get p*ssed on either way man. They want to keep a brown man down. They don’t want to see me with money. Why? Because I might help myself, my family? Give a kid a chance.

“You want to book McGregor, Khabib, and make your own pockets fat? Cut me out a check and I’ll sit on the sidelines. But I’m not your backup no more. You like me, you don’t. I’m the people’s champ. I’ve had my belt before Dustin and I’ve had it before even Khabib.

“And these dudes want to act like they don’t even know me? I would too if they were scared as f*ck of me.”