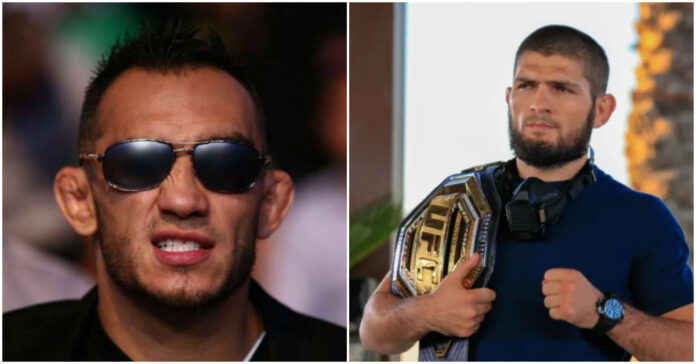 Tony Ferguson fired shots at Khabib Nurmagomedov in an unofficial promo video for The Ultimate Fighter.

Coming off the first knockout loss of his career, Tony Ferguson has stayed active in the media and continued to share updates with his fans. His recent loss to Michael Chandler marked the fourth fight he dropped in a row, leaving many to speculate what would be next for the former interim UFC lightweight titleholder.

While Ferguson has not shied away from taking a few jabs at the legendary Khabib Nurmagomedov every now and then, he went a step ahead with his new promo video teasing a season of The Ultimate Fighter. ‘El Cucuy‘ has been calling to compete against ‘The Eagle’ in any sporting format and had suggested the idea of the two opposite each other as coaches.

““Next TUF Season” Or… We Make Something Happen On A Different Platform Eyy Fathead, Eure Fat, You Smell Funny, & Ur Momma Dresses Ya’ Weird *mack* For My Crew – Champ -CSO- # CertainFightsInterestMeToTrain 100% SomeoneShowOl’Boy For Me- “

Tony Ferguson vs. Khabib Nurmagomedov – a match cursed by the MMA gods

Having been put together and canceled four times in the past, Tony Ferguson vs. Khabib Nurmagomedov is a matchup that seems to be cursed by the MMA gods. At the time when the Dagestani was on the rise in the UFC with six wins, he was set to take on Ferguson in the finale for The Ultimate Fighter Season 22.

Although the bout never took place, Ferguson’s idea of the pair competing against each other as coaches on TUF could make for entertaining viewing. Khabib has stayed firm on his decision of retirement and is unlikely to ever be seen inside the octagon again.

An opportunity to return to the UFC might be lucrative but Khabib also has his own promotion, Eagle FC, to focus on. The Dagestani native has been doing a run of media tours in order to promote his brand’s upcoming fights and may stick to doing so in the near future.

Would you like to see Ferguson vs. Khabib on TUF?