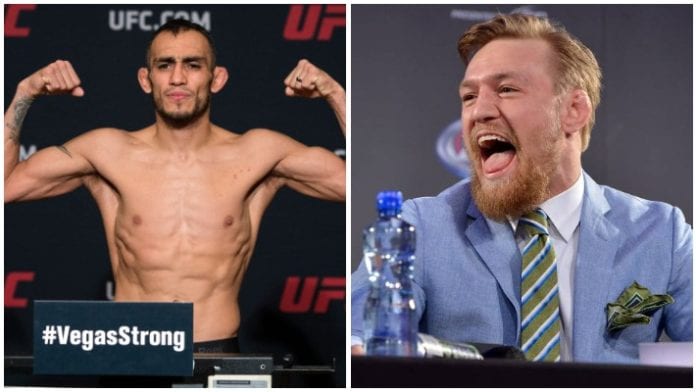 Ferguson meets Justin Gaethje in the UFC 249 headliner this Saturday for the interim lightweight title. The winner of the bout will ideally go on to face Khabib Nurmagomedov in a title unification fight later this year.

However, one name that will always remain in the headlines is McGregor who will no doubt be keeping an eye on what transpires this weekend. When asked about the Irishman on ESPN First Take, “El Cucuy” explained why he believed McGregor was fake which is why he has no interest in facing him as a result.

“It’s like chicken nuggets,” Ferguson said referencing his McNuggets nickname for McGregor. “You ever see chicken nuggets made? It’s made of that fake, pink stuff, man. I mean, I love chicken nuggets, but I’m going to be real man, he’s fake. He’s an athlete when I first met him but you hang around other people and you don’t know how to spend your money, you’re a knucklehead out there — that’s not someone I want to compete against.

“Obviously, Conor’s a good athlete, but he’s not on the radar though, man. Everybody at SportsCenter and ESPN, they want to keep posting these videos and they want to make sure that Conor stays in the limelight, but I’m going to be real. The two athletes that are keeping this sport alive is myself and Justin Gaethje at UFC 249.”

McGregor is naturally hoping to regain the lightweight title and exact revenge on Nurmagomedov in a rematch after losing to him in 2018.

However, it looks like even he will have to wait in line as the winner of UFC 249’s main event will be next for Nurmagomedov. Hopefully, that remains the case.

What do you make of Ferguson’s comments on McGregor?