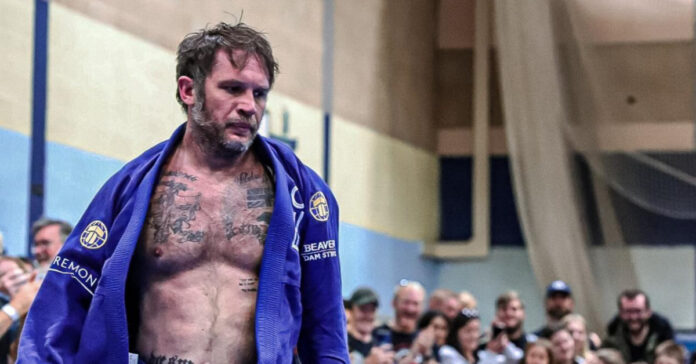 Hollywood star, Tom Hardy has been praised for his humility and competitiveness during his recent appearance at an ADCC Brazilian Jiu-Jitsu tournament in Milton Keynes – where the grappler scored a pair of gold medals.

The Peaky Blinders and Mad Max star recently competed at an ADCC Brazilian Jiu-Jitsu event in Milton Keynes in his native England, scoring a pair of gold medals as a blue belt at the 2022 Open Championship held at Oakgrove School.

And over the course of last weekend once again, Hardy managed to defeat each and every competitor en route to another gold medal triumph – this time defeating Sean Rosborough in the tournament final.

“Everyone recognised him (Tom Hardy), but he was very humble and was happy to take time out for people to take photographs with him,” A spokesperson for event organizers, Ultimate Martial Arts Championships said. “It was a real pleasure to have him compete at our event.” (Transcribed by Yahoo! Sports)

In a snippet of footage captured from one of Hardy’s matches over the course of last weekend, the former is pulled into guard during a Gi match, and successfully stacks as his opponent attempts to setup a triangle.

Carefully passing guard to side control eventually, Hardy steps over and nabs hold of an arm. Pulling apart the grip after some hand fighting, Hardy forces a quickfire tap as he progresses through the blue belt category en route to an eventual gold medal victory.