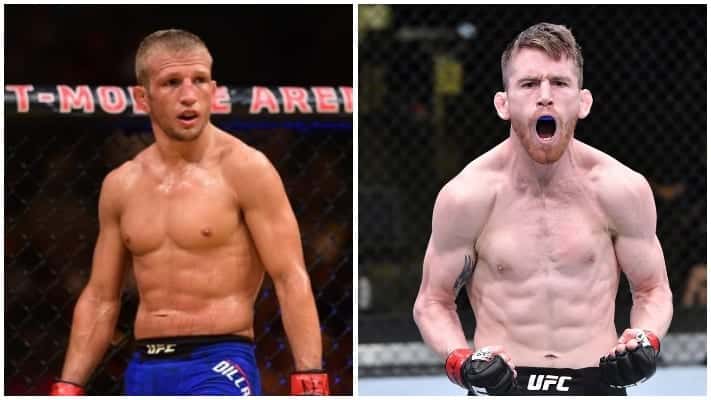 Former UFC bantamweight champion TJ Dillashaw has been booked in a five-round main event for one of the more highly anticipated returns to the Octagon in recent memory.

We have not seen Dillashaw (16-4) step in the cage since January of 2019 where he suffered a first round knockout loss to then flyweight champion Henry Cejudo in his bid to become a two-division champion.

Following the loss it was revealed that Dillashaw had tested positive for EPO and he was thus suspended for 2 years and stripped of his bantamweight world title.

Now finally eligible to return, the former champ in Dillashaw has booked his comeback fight against one of the top bantamweight contenders in Cory Sandhagen according to ESPN reporter Brett Okamoto who announced the news on social media.

“TJ Dillashaw is back … Dillashaw (@TJDillashaw) vs. the surging Cory Sandhagen (@cors_life) has been agreed to for the date of May 8. Five-round main event, per sources.”

This is almost certainly a number one contender’s bout with the winner presumably set to face the winner of Aljamain Sterling and Petr Yan 2. The return of the former champ in Dillashaw is guaranteed to bring some fireworks to an already stacked Bantamweight division.

How does Dillashaw vs Sandhagen play out? Will Dillashaw reclaim the gold he once had?