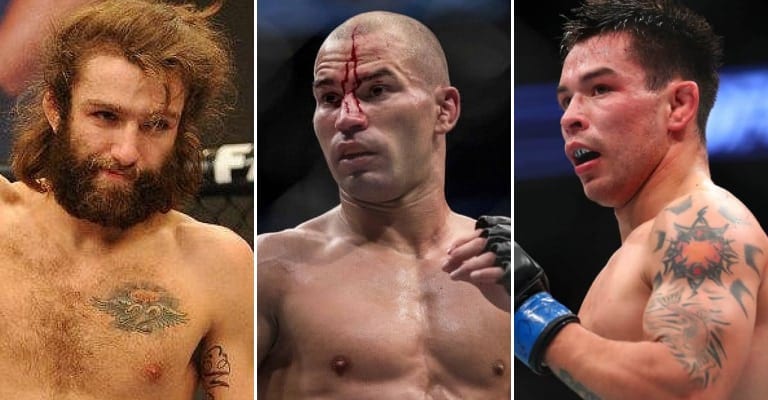 The fallout from Conor McGregor and his goons storming Thursday’s media event has now caused two fights to be canceled and removed from the card due to injuries sustained during the madness.

And that has resulted in three fights overall being canceled.

After news arrived tonight that Michael Chiesa vs. Anthony Pettis had been called off of Saturday’s (Sat., April 7, 2018) UFC 223 from the Barclays Center in Brooklyn, New York, ESPN’s Brett Okamoto reported that Ray Borg also pulled out of his UFC 223 bout with Brandon Moreno after both fighters were injured by broken glass caused cuts to both men:

Per sources, Chiesa/Pettis and Borg/Moreno are both off. Chiesa’s facial cuts, and his weight cut was thrown off. Borg started to experience problems with his eye, from the particles of glass.

Chiesa initially went to and left the hospital with lacerations on his face and was supposedly going to fight, but it seems his weight cutting has been affected by it to the point where he cannot make the lightweight limit to face his biggest fight to date against former divisional champion Anthony ‘Showtime’ Pettis.

Meanwhile, Borg was supposed to take on Moreno on the preliminary card, however, some shards of glass got into his eye, making him unable to fight on Saturday night in Brooklyn.

Perhaps the least surprising cancellation is Artem Lobov’s bout with Alex Caceres, as Lobov was promptly removed from the card due to his participation in Thursday’s melee.

Caceres will not be receiving a late replacement opponent.

McGregor and Lobov, flanked by over a dozen goons, stormed into the area of the Barclays Center where busses carrying fighters for this weekend’s UFC 223 and began smashing bus windows with metal dollies and trash cans. Their intended target was allegedly Khabib Nurmagomedov, who had into an altercation with Lobov on Wednesday.

That makes three total fights removed from UFC 223 now because of McGregor’s antics, which he may still be charged with a crime (or crimes) for.

Combined with Tony Ferguson pulling out on April Fool’s Day and featherweight champ Max Holloway stepping in and stepping up in weight, this event has been an absolute circus, and it hasn’t even occurred yet.