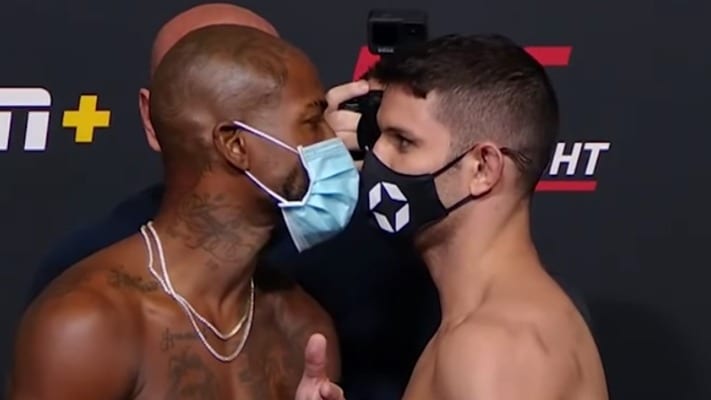 Kicking off the UFC Vegas 12 main card is a lightweight tilt between Bobby Green and Thiago Moises.

Round 1: Moises lands a leg kick. He is very aggressive early on with kicks as he partially lands a head kick but Green is unaffected. They start to swing more in a flurry before Moises goes for a takedown. Moises gets it but Green reverses and is in the sprawl position. Green has his neck as they stand up but separates after attempting a knee. Green lands a teep kick and follows it up with a straight left. Green is keeping his hands low while walking forward. Moises is swinging heavy but misses. Green takes a shot but continues to taunt Moises. A pretty even round.

Round 2: The striking continues to start this round. Moises temporarily falls to the ground after a strike but is not hurt. Green shoots for a takedown this time and gets it. Moises returns to his feet and reverses the position as he has Green’s back. Moises drags him to the ground and attempts a heel hook. Green is doing everything he can to scramble and get out of it and eventually escapes as the fight returns to the feet. Moises looks a bit winded as Green advances forward. Green lands a one two and follows it up with a step-in elbow. Moises is just defending and not throwing anything. Green lands a body shot. Moises starts to swing back and lands a leg kick. Moises misses a spinning heel kick. Moises is now more active as he nearly lands two big rights on Green. Green goes for a flying knee as the round ends hectically.

Round 3: Green continues with some teep kicks. He attempts a one two but it’s blocked by Moises. Moises lands a leg kick. Both fighters continue to swing big but neither strike has affected each other. Moises misses another spinning heel kick. Green appears to have blood near his eye. Moises is starting land a bit more but Green dodges a head kick. Green clinches him up against the fence and takes him down. Moises gets up right away and reverses the position as he now looks for a takedown. He gets him down and has control of his back. Green tries to land some elbows but still remains controlled by Moises. Green slips out with 20 seconds remaining and the fight will be standing for the remainder. Both fighters are swinging until the fight comes to an end.